I got a couple of really swift responses from people who are not riding draft horses, and wanted to share!

The first email I got was from Maria: 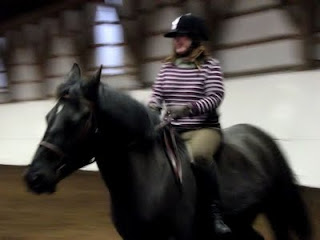 The horse I've been riding (and hope to purchase in 2010!!) is about 15'1, French Canadian, built like a...well..horse, lol! Big boned, very overweight himself (if I do get him, we're going on the same mission and you and Miss B!), but perfect for me in every single way. I have no idea how much he weighs.

I was told at my barn I can never ride any horse but him (A Fat Girl In: I suspect she could ride whatever she wanted, but sometimes we just have to work around the stereotypes and ideas that people get in their heads.)--and had no problem with that!!! We've even jumped 3"-something I was told neither of us could ever do :) (A Fat Girl In AGAIN: This is the stuff I love to hear!)
I do ride a daintier QHx sometimes, who also doesn't have any problems with me, but still he is my love!

I am pretty sure the expression on her face says it all!

For those who don't know, French Canadians are a delightful breed of "light draft", which I think are pretty much the bee's knees. After I lost Angel, my first ride back was on a friend's beautiful, talented four year old French Canadian mare that I completely fell in love with - too bad her family is completely in love with her, too! If ever a horse had a forever home, I imagine that one has it!

I also got an email from Kate, who has just recently started her new partnership with Rosie (though her Flickr account tells me that it won't be "Rosie" for much longer, any name ideas?): 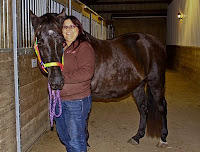 Here's a link to pics of my new horse and me... I weigh about 215lbs, and am 5ft 3in tall. Rosie (soon to be either Mocha or Cocoa!) is about 15.1 hands, and I have no idea how much she weighs. I tried a weight tape, which said 1235lbs, but I know those are less than accurate! She's a registered TWH, not a lick of draft in her!

Again, another situation where I think the smile more than says it all! What a great looking partnership that looks like it is going to be! And psst, you can see her whole Flickr series of Rosie here!

Talk about high wattage happiness here! LaVada sent me some pictures and a really touching email about her and her mare, Kahlua. My favourite part? Her email subject was "I've never even ridden a draft! :)" 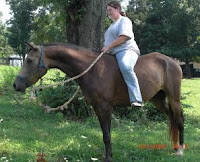 I've always ridden my family's stocky Quarter Horses and my family just isn't build to be tiny. Our horses are working horses in the summer and trail partners in the spring and fall. My aunt weighs in at 250 and her working mare has NEVER had a problem doing work all day or hitting the trails. The family horses are always excited to work and we make sure saddles fit and take note if the horses ever seem sore, which is very rare and usually only relates to a stone bruise. My aunt has been working on her weight for years, but seems stuck between 225 and 250. She's come to the conclusion that if her horse is not bothered by it, she won't let herself be bothered by it anymore. (A Fat Girl In: Hard for some of us to come to terms with, I know! Before I let myself enjoy riding Angel, I worried incessantly about it...)

I had never even THOUGHT of heavier riders needing to ride heavier horses until I was interested in taking formal lessons. I took my first lessons on an Appendix Quarter Horse mare and was told I rode very well for a "heavy girl". What kind of bass-ackwards compliment was that? The following year I moved to another barn to take lessons. They perched me up on a Friesian stallion and when I asked why (considering all the other horses were arabian and arabian crosses) I was told I was too heavy for the other horses. I weighed 180 lbs at the time.

I rode with that barn for a short while but when another girl who started at the same time as me went to her first show, I was told I wouldn't be able to go as the only horse I was allowed to ride was their stallion and there was a no-stallions policy at the showgrounds. I quit riding lessons shortly after that. I'd lost a lot of confidence in myself and my riding abilities then. (A Fat Girl In: What a shame - finding a supportive coach who is willing to talk about these things is so important, and being able to discuss your goals and plans and have them help you make them happen. That's the point of a coach, is it not? I'll discuss this more in an entry about support.)

I started riding the family's quarter horses again and gained some of that back. Last summer I was given a horse from an extended family member. She was an arab/QH cross and man was she a handful! I began working with her from the ground up and despite having worked with younger horses many times before, she tested me in every way. I happened upon a trainer who exchanged work for lessons and she built my confidence up, taught me to think different about horses, and helped me work with my mare.

These are photos from the first time Kahlua had anyone on her back off leadrope. We've had other people put rides on her so I could focus on working on resensitizing a mare I began riding last winter, but since then I've done slow rides around with Kahlua. The trainer who worked with me over the last year has never brought of weight as an issue. She has told me that if I need to tone up, I'll know because I will feel it everytime I'm sore from riding. My horse will let me know if I'm reaching a point where weight affects my ability to ride and "until then, just saddle up and giddy up!"

Haha I apologize for the riding posture itself if it seems a little wonky. This was her first time off leadrope and I was certain she was going to take off any second if I put my leg to her, but I've found that just doesn't seem to be in her plans anytime we've been riding. At that point she was more interested in backing up at 50mph if we put any rein on her (which also explains the "reins"). True, I was more perched on there and we encouraged her to just softly move forward around a pasture she was familiar with, but being able to ride my own mare for the first time was truly one of the happiest points in my life today. (A Fat Girl In: Isn't it really about making yourself happy? Of course we recognize our limitations but if we can be happy in the end...? And I would say, judging by these gorgeous pictures, that Kahlua is just about as happy as LaVada! Though I have to say, I am jealous about the Friesian stallion part!)

I'd love to add more pics and stories of non-drafts to this post, so if you're a plus sized rider out there riding a non-draft, let me know at seeking(dot)sendiri(at)gmail(dot)com! :)
Posted by A at 11:08 PM

Email ThisBlogThis!Share to TwitterShare to FacebookShare to Pinterest
Labels: mythbusting