I realize it is no longer the 1st of January so really "past" the time for resolutions, but I'm going to talk about them anyway. I was still caught up in the emotional exhaustion of what my November and December turned out to be on January 1st so I chose not to make any resolutions, except for one, that I have managed, thus far, to keep quite well...

With all of the work in November/December, I was drinking a lot of coffee. A LOT. I am a water drinker by nature but I kept pumping in the coffee and cola soft drinks to try and keep my energy up instead of just resorting to a Red Bull or something else - and I was, as a result, not drinking enough water. I can state proudly that since Christmas Day, I have only had two small glasses of 7Up (they were mixed with wine, haha) on the day after New Year's. Other than that, no pop or coffee at all. I feel pretty good and most days, I don't even want any. I have taken to drinking chai tea in the mornings, but that is it - my water intake has increased significantly, as a result.

I always like to take some time and reflect on my resolutions from the past year when I start to think about new ones. I discovered last year that general things are easier to keep, and easier not to disappoint myself about. I think it was helpful.

So, without further ado:

I want to be "visible" with Bronwyn - in whatever context that ends up to be - horse show, clinic, demos and trade fairs.

I also want to be talking about plus sized riders in person. I go to a lot of equine trade fairs, shows and events with my mother who runs a small home based horse show clothing business (yes, she does make plus sized clothes). I'd like to take a flyer or maybe some business cards along with me. Maybe someday it will develop into talks and demonstrations. Have to start small!

...my "non-horsey" resolution is also health related. My resolution this year is to allow my health to take priority on a daily basis. This means taking the time every day to prepare myself healthier foods, go for a walk, work out, etc. This also means looking after my mental health, which is likely going to mean more time spent on horseback.

I would say that Bronwyn and I were definitely more visible last year. We attended one show and two public trail rides, as well as a local parade. I would love to expound on this a little more, and take in a clinic, continue with the trail rides, and also plan to bring her along with me to the Equine Review in late April, which is a trade fair with demos, etc. Ideally, I would like to do a demo on clicker training and with our draft under saddle club. I would also like to show her under saddle at at least one show.

I would also say that I succeeded in talking to more plus sized riders - not just in person, but online. I made a forum to go along with the blog and we have built a safe, comfortable, supportive community there where we encourage and challenge one another to be the best that we can be in all aspects of our lives. I brought business cards and a powerpoint presentation that I set up at trade fairs we went to - and talked to many a person - this year, with Bronwyn along, maybe I'll talk to even more people!

As for my non horsey related goals?

...to allow my health to take priority on a daily basis. This means taking the time every day to prepare myself healthier foods, go for a walk, work out, etc. This also means looking after my mental health, which is likely going to mean more time spent on horseback.

I would say on the first point, I was reasonably successful. In the year of 2010, I lost probably 50lbs, and kept it off. I stood up for myself emotionally (sometimes it took a little longer to do it, but I always did). I spent more time on horseback than I have in quite a few years, I would say. I developed a deeper connection with Bronwyn and challenged us both, physically and mentally (hello, four hour trail ride anyone?). I would consider that a successful resolution.

As for my novel? Epic fail on that one, though I have begun to consider a different route for the manuscript (e-publisher) and that is something I aim to pursue in 2011 a little more. I just ran out of time and steam in 2010!

So, for this year? I'm going to up the ante a little!

- One show under saddle, one clinic, one mounted parade, one beach ride and one trailride (with the people I ride with, I know the trail ride issue at the very least will exceed my goal!).
- More saddle time in general.
- More opportunity to share my horses with those around me who don't have those opportunities.
- And the most specific one? For my family of four to be able to go on a Christmas day trail ride - this means I have two horses to get broke this year!

Health Related
- 500 miles in 365 days (either with my Leslie Sansone DVD, or on a piece of gym equipment).
- 5k marathon, EVEN IF I JUST WALK.
- 100lb total loss by the end of the year - this means since my beginning weight, which will put me at 225lbs.

Life in General
- Give myself a break emotionally once in a while.
- (I've already got a good start on this one...) Embrace the idea that comfortable and easy trumps dramatic and stressful every. single. time.
- Enjoy the blessings that I have been given. :)

So... how about everyone else? By now, you all should probably have had a chance to move toward your goals and see how they're going to work out for you. What's the word? Your resolutions?
Posted by A at 9:09 AM 11 comments:

AND I have gotten a chance to ride in it!

I am just going to say it right now: I am never, ever trying to buy a "non" name brand saddle again. The difference in craftsmanship, leather quality, EVERYTHING, is so significant. Sure, I had to expand my budget a little bit, but I think I mentioned in my last entry that I had a wonderful experience with a seller who was willing to work with me. (So Nora, if you're reading this, thank you again! I know I've said it a million times, but I'd keep saying it!)

I picked it up at my postbox across the border on Tuesday, the 4th, but in my excitement, even though I knew (believe me, I kept reading the specs on the saddle over and over) that it is rigged for a dressage girth, I "forgot" and so didn't have a suitable girth to use... so it sat in my living room on my saddle rack while I admired it from across the room until Saturday morning when I was finally able to get to a local tack shop and pick one up.

I ended up with a 26", which WILL girth up and go up several holes, but I am told is a little too short. Anyways - I had to get a girth and that was the only option I had and if I didn't get something soon, I was going to strap it down with balertwine and sit in it! With the holidays and troublesome weather on the East coast, it took just short of three weeks to arrive, so I was pretty anxious.

So Saturday rolled around and I headed to town, went to the gym, picked up the girth, ate some sushi, headed home, and immediately changed my clothes and headed out to the barn. We've been getting some snow, so I knew I couldn't do too much but I needed to at least SIT in that saddle!

Anyways... this is what you're all here for! The pictures!

For comparison's sake, I am first going to refresh your memory with a couple of pictures from the 18" Thorowgood that I bought a while back. The extended panels were too long for her short, stout back, and she was pinched at the shoulders. It also really didn't fit me, like, at all. 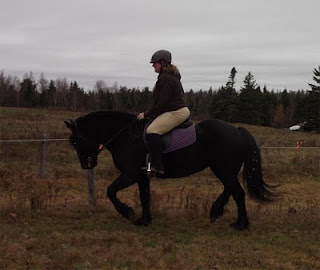 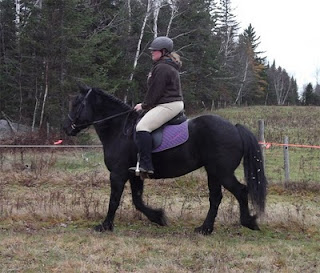 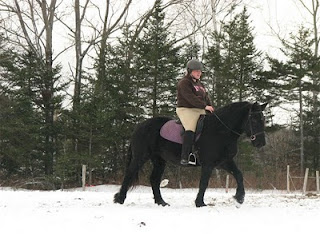 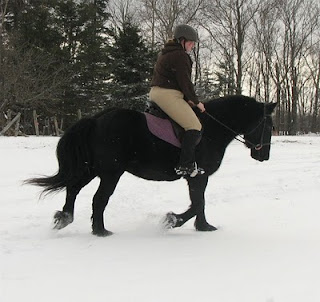 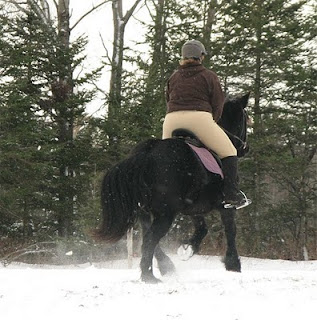 If that doesn't look like a happy horse, I don't know what does!

I normally am very cautious riding in the snow but I was so excited about this saddle and the obvious difference in how easily and pleasantly she moved out that I just had to see what a canter in a well fitted saddle felt like. We have not done a lot of canter, DUE to the saddle issues we have had because of slipping (anyone remember me getting deposited on my head at the canter from a saddle that slipped all the way around Bronwyn's belly?) and also due to the ill fitting saddles, she had some issues (ducking, veering, etc) when we weren't in a roundpen in a "forced" circle.

We took off up through the snow... straight, balanced, comfortable and SO MUCH FUN.

I have had a few offers to buy this saddle from me (before I even got a chance to sit in it) but I have said more than once that I love this one so much I think I might have it buried with me, haha! If anything, it is a smidge too wide for Bronwyn, but I would rather a little too wide than too narrow, and still a little tight for me but I think it works for the length of my leg, just gotta work some of my butt off.

Now I feel that I can finally move forward instead of just floundering around in the same place. I have things I need to work on (hands out of my crotch, no piano hands, and eyes up, to name a few things!) and I feel like I can work on those now that I am not obsessively thinking "Is this saddle hurting my horse? Is this causing her pain?" - I feel like I can comfortably spend more time in the saddle now - it's refreshing and makes 2011 seem pretty bright and exciting to me!
Posted by A at 8:54 AM 10 comments: