Okay - just quickly, before I get down to some AMAZING photos someone sent me this morning...

I was cruising around Youtube as I sometimes do (to see my Youtube channel, you can go to afatgirlafathorse on Youtube), and I came across the infamous fat girl, Mo'Nique's channel, in which she has a brief, and quite funny commentary on fat girls riding horses.

I was not able to reply to one comment I found particularly disturbing:

It was written two years ago when the user was 14, so I declined to send her a message because perhaps her viewpoint has changed - but this lack of education really hurts us as plus sized riders. Both of the bolded points are WRONG.

There is a horse out there for EVERYONE. Whether it is a draft, a stock horse, a morgan, a draft pony - anything - any breed of horse can have individuals within it that are capable of carrying great amounts of weight. As I said in my mythbusting entry, that does not mean that a specific breed in whole is suitable for plus sized riders - every horse should be looked at as an individual based on varying criteria - but anyone who is fit enough to get into the saddle, there is a horse out there for them. It's our responsibility, as plus sized riders, to break those stereotypes and educate people so that more plus sized people realize that horseback riding IS a viable option for weight loss and fitness for them. If you have to tell people your weight, DO IT.

They aren't very common, but you guys know there are people out there on the interwebz that hate that I am writing this blog - they hate that we're being successful even though we're fat or overweight, and they hate that people are continuing to bring overweight riders to light as a going "issue". We need to change the way they think, and I think you, my readership, are the perfect people to do it. :)

Enough of that PSA now.

NOW! Onto the really good and fun part!

I am opening up a brand new feature on the blog and it is up to YOU, my readership, to make sure that it is continued!

(In which I feature a rider, horse, event, business, loving trainer, etc, that someone submits to me, and people all can see the wondrousness!)

So today, I chose an email that came to me with intent for the Mythbusting entries. I thought the writer of the email looked absolutely fabulous on her mare and knew I had to share it even though I am not planning on writing another photographic evidence entry for Myth #1 (yes, what I am saying is that if you do ride a draft or draft cross, the floor is now OPEN for your emails as well... so do it because you know you wanna... seeking(dot)sendiri(at)gmail(dot)com - and keep all those emails coming, I love getting them!).

SO - without further ado... Megan and Brooklyn!

(For the record, I didn't think there was anything wrong with the pictures, but Megan sent me a disclaimer: "A little disclaimer about the pics. Those were taken back in April at her very first time away from the barn, and it was an overnight show to boot.. Brook has also put on about 75-80 more lbs since then and she has muscled out considerably." 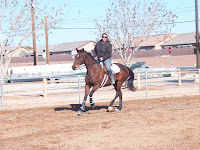 I was always pretty fit as a teenager not "skinny" but not "fat" either just normal, like a size 9-10 jeans. I started college in 2003 put on the freshman 15 then got in a really bad skiing accident in Jan 2004 and was laid up for a few months, put more weight on, then tore my ACL in late 2004 in a riding accident and was on crutches for months - put on even more weight. I'm currently sitting at 230lbs. I've been around horses since I was 5. They are a major part of my life and I would be lost with out them. Anyway, I currently own a 9 year old OTTB Mare named Brooklyn. She stands about 16.2 hands and weighs about 1250lbs. She's got some good bone to her, not too thick but not toothpick like either, but she is built VERY much like a TB. I got her in Jan 2008. She is a rescue horse that had some serious issues when I got a hold of her. Feet were turning up, teeth were sharp, rain rot, ulcers, worms, 250lbs under weight. I rehabbed her for about 8 months before I started to put training on her. It was worth every second and she has made a world of difference in my life. 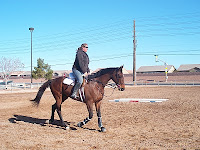 Since most people don't know the bond she and I share because of her past and what went into fixing it, I get a lot of dirty looks at the hunter/jumper shows. Some people give me the "are you kidding getting on that horse" look or my favorite is the "how the hell is that horse suppose to lift your fat ass over the jumps in the 3'6" jumpers" look. But when we get in the arena and do our thing people are amazed with my athletic ability as a plus sized rider and the fact that I have a very soft seat that allows my mare to clear the jumps with ease. Do I wish that I was a thinner rider? YES of course. Am I doing harm to my horse? Nope, she is perfectly sound, healthy and happy*.

*Yes, I think she looks pretty happy, too! And I think the two of you make a great pair. :) I love that you are out there competing and doing your thing and that you don't give a toot about what other people think. :) You're an inspiration, Megan!
Posted by A at 7:52 AM