I mostly kept this under wraps because I kind of knew that if I talked too much about it, I would jinx it - because that is pretty much the story of my life - but I moved Bronwyn on Sunday to the barn that I have been riding at since February. She is now 15 minutes away from me instead of 45 minutes, but it was bittersweet for me.

On the one hand, I am super excited to be able to get out there more than once a week or once every two weeks to ride - I am right now aiming for three rides a week with someone else working her on the longe for me once or twice a week. On the other hand, when I go home to visit my family, she won't be there for me to hang out with. The plus side of this is that the only horse that I will have there to ride will be Rex and maybe I will get some more rides on him so that he can be that reliable, broke horse that I can just hop on and go.

Overall, I waffled back and forth a lot on the decision to move her, and ultimately, the decision is that it can't possibly be a bad experience for either one of us. She will have the opportunity to be handled by more than just me, which is never a bad idea - I will get more riding in. It's win-win-win.

She, of course, hopped on the trailer like nothing, even after not having been on a trailer for probably a year or so (we just didn't go anywhere last year!). Trailered well, but sweat a little bit, which I kind of expected.

When she got off the trailer, I made the mistake of standing on the other side of her when dad closed the trailer ramp and now I have a nice big swollen purple foot (and I am supposed to start the Couch 2 5K program tonight!) - snorted a lot at walking into the barn - horses on each side is something a little new for her - and into her box right next to Lolya, the mare I ride in my lessons and across from Quantum, the friesian stallion that also lives there. I longed her a bit after she had been settled in some and she relaxed a little bit.

It was hard for me to relinquish control, though. Myself or my family (mostly my dad) have been the sole caretakers of any of my horses for pretty much my entire life. I have never boarded before. My biggest fear is that she will be difficult and cause trouble. She can be bossy in the pasture, she can be annoyingly spooky, hard to catch in the pasture, hard to halter. I had to nearly be pushed out of the barn by the BO and my coach when it was time to go, as I kept reminding them of her little peculiarities and told her to "be good, and don't hurt anybody!".

I've had several reassuring messages from friends and I think that I know, in the deep part of my heart that sometimes gets overrode by my constant worrying, that she will be just fine, and she will flourish with all the handling and attention.

In all of the hustle and bustle and nerves, I only pulled out my camera once to take a picture of her in the first boxed stall that she has lived in since the first winter that she came to live with me, and then proceeded to take the exact same shot with my phone: 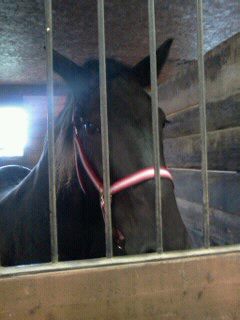 And G, my boyfriend, who dutifully helped me unload my things and then stood around supportively while I fretted and felt anxious, snapped this picture after I had unloaded her and was letting her graze a little and chill out: 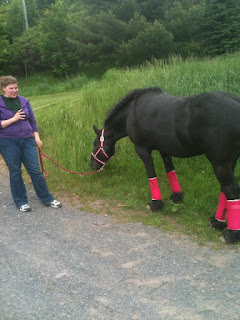 I am sure that the updates will be a little more frequent (as well as the pictures!) now that she is closer and I should be seeing her something more like 4 times per week than 1 time per week. Overall, though I am very anxious and happy-nervous about this move, I am thrilled about what this means for us! :)