I was with a group of some of my very best (and most supportive, ever - seriously, two of them are not really 'horsey' but read my blog and watch my vlogs anyway!) girlfriends last night and we took a few minutes to reflect on last year's resolutions and how we did.

Over the years, I have discovered that it is easier for me to succeed with my resolutions if I make them pretty general - instead of "I want to lose X pounds", or "I want to go to X horse shows", I say "I want to focus on my health", or "I want to become competitive with my horse" - this way, at the end of the year, I can look back, sum it up and decide if I succeeded or not - and I am rarely disappointed. I seem to be able to at least find some ways to say that I have succeeded and bettered myself.

Last year, I made the horsey resolution to take Bronwyn to a show. That didn't happen. This year, I am going to aim a little differently. I want to be "visible" with Bronwyn - in whatever context that ends up to be - horse show, clinic, demos and trade fairs,

This year, I also want to be talking about plus sized riders in person. I go to a lot of equine trade fairs, shows and events with my mother who runs a small home based horse show clothing business (yes, she does make plus sized clothes). I'd like to take a flyer or maybe some business cards along with me. Maybe someday it will develop into talks and demonstrations. Have to start small!

Last year, I made the non-horsey resolution to start taking my health more seriously. To do this, I made an appointment with my general practitioner and (gasp) had my first ever physical and internal exam. It was scary and quite daunting (I wavered between taking my pants off or just running out of the office when I was left to undress!) but I survived it. (It doesn't hurt that my doctor is also a horseperson that I grew up showing with and has pictures of her horses in her office that I can stare at when things get uncomfortable!)

It turns out that I hadn't been to the doctor in nine years (I had been to the hospital for sprains and cuts and burns in the ER though)! I had a variety of small health issues (nothing too serious) that had been bothering me for the last few years and I finally addressed those.

I can definitely say I succeeded on that resolution - I now feel completely prepared to talk to my doctor about other things that might come up, and in fact, am planning to talk to her about tackling my weight at our next appointment (within the month). I am also thinking I might get to pick her brain a little bit about my next mythbusting entry, "Horseback Riding is Not Exercise And Fat People Are Being Lazy By Pretending That It Is".

This year, my "non-horsey" resolution is also health related. My resolution this year is to allow my health to take priority on a daily basis. This means taking the time every day to prepare myself healthier foods, go for a walk, work out, etc. This also means looking after my mental health, which is likely going to mean more time spent on horseback.

But enough about me - I want to talk about YOU!

Talk about your goals in the comments... because I love to hear what you guys have to say!

And also, my girls all have a "Happy New Year" sentiment to express in photos. :) Enjoy - the large drafty looking thing that isn't black is Freckles (3yo perch cross), then we have the black one - Bronwyn (5yo draft cross), and then the sorrel mare with belly white is 11yo APHA mare, Jessie, and the sorrel mare that looks like Hidalgo is 6yo APHA mare, Ari. 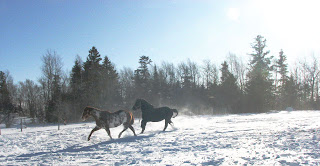 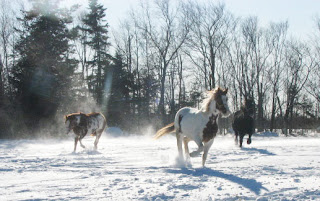 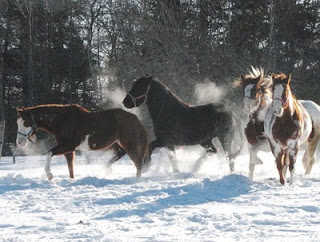 Email ThisBlogThis!Share to TwitterShare to FacebookShare to Pinterest
Labels: inspiration