Can you hear me? How about now?

Yesterday, I attended an event that brings together the Maritime equestrian community after a brief holiday hiatus, January Thaw. In addition to hosting a great little trade fair expo, with booths from all kinds of different stables and tack shops, they have little seminars and it is a fundraiser for the Children's Wish Foundation. I believe, overall, they raised right around $3000 for the CWF, which is not too shabby, and I was impressed. Children's Wish Foundation is something I could really get behind as a charity!

I was there helping my mother out with her booth - she makes show clothes and a variety of other things, and April through May we are usually ridiculously busy with these sorts of events. 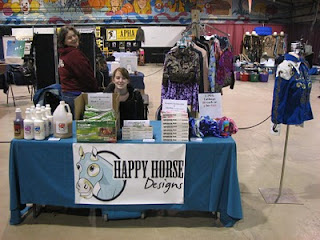 Anyways - they had all kinds of great booths there, including a pet communicator who was offering 10 minutes of communication for $10. She seemed like a bit of a kook but it was pretty cheap entertainment comparatively. I sat with my sister while she 'read' her problematic German Shepherd rescue (at first, without anyone telling her, she picked up on "a cute little while dog who likes to take things and hide them" - not the dog in question but my sister does have a really adorable little miniature australian shepherd who has a crate we like to call "the trash can" because of her penchant for stealing stuff and hoarding it). It was interesting and definitely a lot of fodder that could be true for any dog.

I tried to be very careful when I sat down for a reading on Bronwyn (just for fun, mind you!) not to give too much information but my sister sat with me and said I did leak a lot of things. Shay had mentioned during her reading that I had a "spooky" horse (they were talking about the dog being jittery because of her past), which kind of bugged me because then she focused on the spooky thing.

When I first sat down, I definitely thought I was going to get some kind of lecture because the first thing she picked up on was "You are way too pretty to be so heavy" from Bronwyn. Great, she has an issue with my weight. Then she went on to tell me that I was actually a very light rider (I have been told this many, many a time), and I am very good at what I do, always have been (implying I have been doing it for a long time which was not something I told her), but I just needed to believe in myself and stop second guessing my skill and "fake it til I make it".

I went on to "ask" Bronwyn why she had such a problem with my father. I am 200% sure he has never, ever hurt her, but she is consistently very jittery and sketchy when it comes to him. The communicator told me it was because he had a very low timbre of voice similar to someone at one of her previous homes who may have abused her, and implied that she had had multiple homes before I got her, and that some man may not have been very friendly with a rake or pitchfork. I, by no means, believe she was ever abused (neglected, definitely), but sometimes she makes me wonder if she got a smack or two that wasn't totally warranted, just because of her behaviour. Bronwyn also said I had something emotional blocking me and I just needed to "shed some water" (which apparently is what most horses refer to crying as) to get over it.

Overall, not a bad bit of entertainment though I was disappointed that Bronwyn's "personality" didn't come over as strongly as Bella's did when my sister had her reading - apparently, Bella told her that she needed to forgive someone in Bella's history and "get the f*ck over it!" (dog's words!). Also, at one point, the communicator went "oh! Sit up straight! She is a very no nonsense type of dog. She makes me want to sit up straight, too!" and told my sister to drink more water (but didn't tell me to, which is funny because my sister drinks very little water and I drink several litres per day).

The communicator gave me some ideas for dispersing adrenaline in the body of a spooky horse, which include rotating her tail (draping from side to side), stretching out her spine and massaging down the backs of her legs and her heels in behind. Just for kicks and giggles, I tried it when I got home. Bronwyn was a little stiff and resistant when I picked up her back feet, but immediately slouched into relaxation the second my thumbs hit her heels to massage. Even if it doesn't work dispersing her spookiness, it's something she likes and I'll continue to do, I guess!

Also - Bronwyn told me to stretch her more before I ride - her front legs and neck, said she gets stiff in the jaw, and I need to stretch out and twist my back because I can get locked up there (true). It might not help but it's not going to hurt. Oh! And she told me that Bronwyn hates winter and likes to wear blankets - which I can't really vouch for, the cold doesn't seem to bother her, but interestingly enough, she has never ever spooked when I have put the cooler on her - even the first time I did it - and she had not worn one before.

Whether you believe in animal communicators or not (especially ones who can do it over the phone or without the animal present), it's always some interesting insight. I'll take the suggestions she gave me with a grain of salt - the stretching and massage might not help (though I fail to see where massage ever DOESN'T help, properly done) but it's probably not going to hurt, and overall, for $10, an interesting afternoon "insight" into a couple of problematic animals. The jury is still out for me whether it is all "true" or not, but it was fun!