So, it's been just about a month since I moved Bronwyn.

It has been different, for sure. Just when I got used to having her close enough to take it for granted that I can just jaunt out to the barn, we have to plan a whole day around me going to the farm to visit her. As we only have the one vehicle, I have to pack up the dog, drop my boyfriend, G, off at work at 2pm, drive the 45 minutes to the farm, and be back by 10:30pm to pick him up. In amongst that, there is, of course, all the visiting and socializing that goes along with going "home" at any given time!

She trailered well and after Rex's initial I'm-a-"stallion"-protecting-my-herd-of-mares mode and a few scrapes (my poor Bean is no longer the top of the pecking order, clearly!), they all settled in and she is already packing on pounds from the good hay and (now) lush grass pasture. *sigh* All that hard work!

I have been able to get out about once a week since then - once or twice, I stayed overnight so had two full days in a row to spend with the two critters. I haven't schooled her yet, as I really don't have much of a spot to do it (I do have a section of flat grass but I would like to fence it in) but we have spent a few hours re-discovering the trails around the farm. There has been a lot of cutting in the woods around the homestead, which stinks for trees and foliage but kind of rocks for trails - they've had to build wide, steady roads into the woods, which sure beats the rocky, crumbly downhill slides in some of the places where I used to ride! In a few years, there will be some greenery back there and they'll be perfect riding trails. For now, they are hot and dusty. Either way, though, B and I have enjoyed some (mostly, except for my singing of country music at the top of my lungs) quiet time together in the woods before the bugs get so bad that you want to crawl out of your skin.

Another thing I've seen that this gives me an opportunity for is to play with Rex. The poor boy has been attended to physically - fed and watered and feet trimmed (but admittedly not as frequently as they should be), and sheltered... but he has basically had no criteria his whole life. I pick him up to do something with him every once in a while but usually run out of time or ambition before he learns too much. Anyways - I started lunging him and working on some ground work for respect - he can be a bit naughty when he gets trimmed because he knows I can't do much with the trimmer under his feet.

On the topic of trimmers - over the winter months, as I was an hour on the other side of home from my normal trimmer, I ended up finding someone new (I can't remember if I mentioned this already or not) - she does a barefoot performance trim. I will be the first to admit, a lot of this "natural horsemanship" stuff  makes me kind of skeptical, but I was sold after a couple of trims from her. Bronwyn's feet look fantastic -- and when I took her home and compared her feet to Rex's, I realized how much he would benefit - for a couple of reasons - 1) she keeps me on a pretty strict schedule instead of just calling the trimmer when the stars align and they need it + I can afford it + I am available, and 2) his feet are little, and right now, his frogs quite contracted. I don't believe that traditional farriery is BAD for all horses, but he makes a clear case FOR the barefoot performance trim, so we're going to give it a shot. He also had some thrush, which we're onto treating, and I've added some supplements to his feed to try to get a "bloom" on him before I put him to REAL work and ride him some this summer. It sure would be nice to have 2/2 horses riding - and possibly something for a guest to ride so I don't have to ride alone all the time!

Overall, there is no regret to the move back to the farm. You do what you have to do to get the job done. On the one hand, maybe I sound selfish because I won't allow horse ownership to put my goals for the rest of my life on a backburner - and I keep them relatively "cheap" at the farm compared to most - but in the long run, this will be better for the horses and better for me. It also gives me an opportunity to run my dog off leash and see my family so that sure doesn't hurt either!

Oh and one more thing! I am a bit closer to this fella: 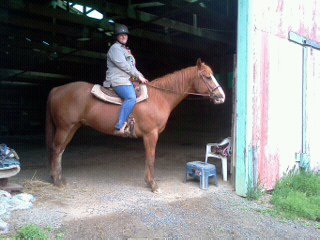 Don't mind me, LOL. Or him! He has been out of work since August but his owner has asked me to come around a bit so she can get him rode. I suspect I will end up trailering Bronwyn and/or Rex over there every once in a while to ride with her once the summer actually arrives. Splash is a registered Appaloosa, and he rides like a freaking dream, even "rusty" after some time off. Super light mouth and responds well to leg and an absolute "pleasure horse" - it is a nice change! I sure wish Bronwyn moved like him!