Sadly, I have nothing great and inspirational to tell you today, but I thought it was high time for an update on the horse front at least - so you all know I'm alive still (though if you're a member of the A Fat Girl & A Fat Horse Forum, you'll know I'm alive and kicking!).

I have selected a date to "debut" Bronwyn at her first show - June 27th. There's a high likelihood that she will be a bit of a scamp while we're there, but you know if I don't start somewhere, I'm never going to start at all. With a little bit of retrospect, I realized it has been seven years since I've shown a horse... wow, I feel a lot dusty!

In preparation for her "grand debut" (I feel like I am grooming a Southern belle for her debutante ball here!), I have been working hard with Bronwyn and keeping her mind engaged as often as possible (even when I am not working her body) - and sometimes keeping both engaged for good long periods. The results have been pleasing.

I discovered the wonder of half chaps last night thanks to a kind forum member - holy shamoles! I feel like someone has been keeping an English riding secret from me! I think if I had known about half chaps, I would have started riding English a long time ago! Loved that great secure feeling that you just don't get with jeans - plus the added bonus of feeling a wee bit like a post-apocolyptic warrior princess while wearing them (teehee!).

I also put on my big girl panties and decided that I won't just ride Bronwyn in the walk trot class (especially since if you do, you can't ride in any other classes and I totally want to play around the barrels at this show!), so we worked on some cantering last night. I did not realize it was a "fear" or something that made me nervous until I was about ready to attempt it. Finally, I figured I might just as well, grabbed mane and took off. I knew I could sit her canter once she had it balanced and under control in the English saddle, but I figured I would switch back to the western saddle to start working the canter on her more (to clarify, she does know how to canter but I haven't done much work on it as I have been focusing on bending and giving and working myself more and more into the fear!)... I was feeling so good with those half chaps that I couldn't resist and went for a spin!

One advantage about the round pen is that the smaller space seems to give Bronwyn a good idea about picking up the correct lead every time (just way too small not to unless she wants to take a fall!). Overall, so pleased and impressed with my girl.

And a couple of pictures not from my most recent ride but from last week! 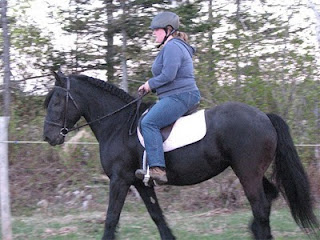 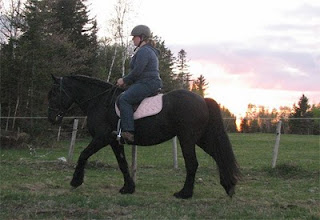 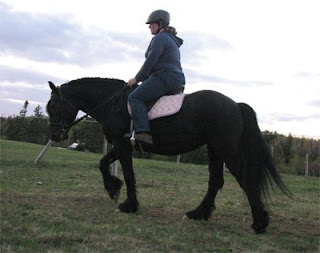