Where you find yourself now...

This morning when I was doing the chores, Serenity was nickering over her stall wall to me, hanging her head over, and generally just begging for scritches. The only way to describe her is charismatic. She's sweet and she draws you in but she's also sassy and full of herself. To say that we love her is an understatement. She's just so full of personality, loves to be scratched and petted, picks up her feet, wears her halter and working on leading. When she goes out with mama, she runs circles around her, kicking and jumping and stretching her legs.

As I was rubbing Serenity's ears, it made me consider Bronwyn, who is, even still, "a little funny" about her ears. Imagine if Bronwyn had had the same kind of start that Serenity is having. Regular handling from the time she was born, taught to pick up her feet and lead when she was a wee wiffet instead of when she was four years old and 1300lbs, fed well, exposed to things. Where would she be now? Not with me, that's for certain. Who knows what she could be doing now? She could be pulling a wagon, competing in low level dressage, a trail string pony, a broodmare - any number of things that she is not, at this time, or may never be, while in my possession. So yes, she did have a rough start in life, but I am convinced that were it not for that rough start, her path would never have led her to me.

I struggled with depression for a long time when I was a teen - from about the age of 12 on to 18 or 19, I was not a happy person. My unhappiness sprung from a variety of different places, including (but not limited to) my weight. I grew up a big girl - I was born 10lbs 11oz - and very little changed after that. There were times when I wished that I was skinny and traditionally beautiful and imagined that so many more opportunities and experiences would open up for me.

It's funny how it is only in retrospect that you can fully appreciate the path you have traveled to end up where you are. I fully acknowledge that I still have a lot of road to travel but I am happy. Somewhere along the road, I came to realize that the number on the scale is not an indication of my self worth. Even if I am overweight, I am still a fundamentally good person, and the cause of my weight - whether it is genetics, lack of willpower, medical conditions - whatever it is - it is no greater a sin or character flaw than anything that any person of average weight carries - nobody is perfect.

It's interesting to consider what a different destination I might have ended up at if any of the components of my journey had been different. There have certainly been times that I have wanted to shake my fist at whatever governing power there is in the universe and ask them if they're playing a sick joke on me, but it is sometimes those changes or turns of events that you resist the most that end up being some of the best things that ever happened to you.

You might not have come to the point in your journey yet where you can look back and say "thank God for all I've missed because it led me here to this", but I think it's important to realize that yes, you are on a journey, and the destination you are at now probably isn't going to be the same in a couple of days, weeks, months, years or decades. And just because you are in a position that you don't care for at the moment, doesn't mean that you are undeserving of the good things and desirable final destination that you're going to end up in.
Posted by A at 12:28 PM 5 comments:

Friday Favourite: Trawling the feed store on a Friday night...

I haven't been home to the farm in a few days until tonight. Man, I have missed my ponies! It's pretty clear that even though the next year or so could be some upheaval (physically) in my life, a pony is going to have to come with me.

Anyways - my Friday Favourite today is about 14 minutes late if you're in the same time zone as me but I think I have enough Mid and West Coast readers to balance it out there a little bit. :)

I stopped by the feed store on the way home to pick up a bag of beet pulp for my "Mission: Make Rex A Fat Horse" project that has been ongoing for a little bit now, and I wandered through the aisles of the horse section. It's not huge and the prices aren't cheap (well, online has kind of spoiled me), but once in a while, a few purchases make me happy.

I ended up coming out with a mineral block for Rex and one for our broodmare, a new bottle of fly spray, a bag of treats for Bronwyn and a hay net for Rex. Little things. Not a lot of money, and not flashy - functional, useful things that aren't glamorous and will get used up very shortly. But they make me happy. I guess it is knowing that I can provide for my horses. It helps me stomach my job a little better to use the money that I make from it to make life a little nicer for my ponies. :)
Posted by A at 12:12 AM 1 comment:

The product/piece of equipment you CAN'T LIVE WITHOUT.

I was pondering, this morning, while standing in my driveway longing Rex in my pj shorts and tank top, the stuff that makes my life easier. What prompted this was my longe line: 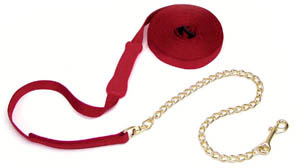 It's made by Coastal Pet/Accent Halters, and I might be a little biased because my mom is the only dealer of these products in our region, but we have been using their products for years and years. They have great halters, too, which every horse in my barn currently wears and has for the last 10 years... but I love this longe line. The rubber grip on it slides up and down the line easily so you can feed out or bring in quite easily depending on the horse that you're longing, and then you can lock it by holding it and it doesn't move around. I think it's probably the most genius idea ever, as someone who doesn't like to wear gloves (I feel like it lessens my 'feel') and who owns a horse (*cough*Bronwyn*cough*) who used to take great pleasure at running through my hands on the longeline. 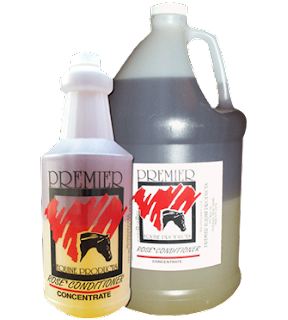 Another thing that I really love (and this is another thing that my mom also deals, haha) is Premier Equine's Rose Oil Conditioner. Considering that probably 80% of my grooming routine with Bronwyn is mane and tail maintenance, this is an important one to me. I also really dig using it on mostly white horses (read: Rex) because it helps them stay cleaner and deflect dirt. As a side bonus, no silicone AND I can get it in concentrate, which is good, because I use copious amounts of product to deal with 2 feet of mane!

For my US readers - both of these products are available quite readily through a variety of online sites and maybe in your local stores. Canadians and otherwise? I'm not sure, sorry - but do encourage you to give them a try!

Those are just a couple of the invaluable products that make my life easier everyday. I think it's always good to share these resources with our friends, so go ahead - fill the comments with your "must haves"!
Posted by A at 8:53 AM 4 comments: 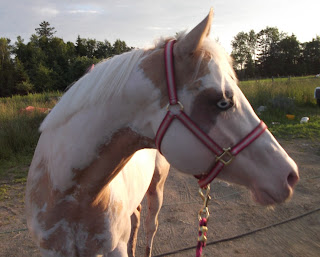 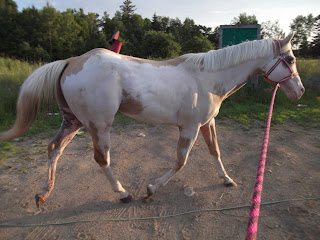 I've talked about it before, but this article drove the point home again for me. I have also written about it at least once, and really... I think you could really say that that is mostly what this blog is about, isn't it? Perhaps not the emotional or mental damage to the extent that the veterans mentioned in the Chronicle Of The Horse article above, but many of us are using the healing power of horses to overcome confidence issues, self worth issues, and the like.

Interesting, isn't it? If you look at it, I don't think there are very many people involved in horses on the hobby/amateur competitor level that haven't used horses as a healing tool in some realm - whether it was keeping them out of trouble when they were kids, healing emotional wounds from relationships gone wrong, etc.

Slightly unrelated, but also slightly related, I thought I'd share this pic, but not too much of the story. Let's just say that I know this woman believes in the healing power of horses. This is one of my blog readers and good friends, Jo. My boyfriend and I spent a lovely weekend with her and her daughter this past weekend, soaking up some sun (a little too much in my case!) and participating in a good blend of horsey, beachy, and touristy things. We also spent some time with another blog reader/good friend, Krista... and I'm sure we snapped some pictures of her horses, but I believe they're on my boyfriend's camera. I will share when I can get my grubby paws on them! :) 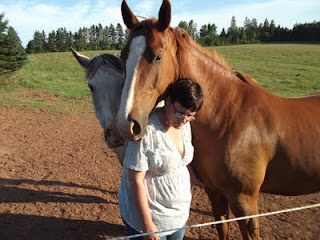 I have not forgotten about you all!!

I know, I know! I missed two Friday favourites AND I have ridden four times in the last week and we have a lot to catch up on, but I am on the way out the door to a wedding, and last week was watching my sister graduate... but I WILL get to you this week! AND I will have some photoadventures next weekend as I am going to go visit a couple of blog readers/forum posters. :-D

Have a great holiday weekend!
Posted by A at 11:27 AM No comments: