It's okay to stand up for yourself.

So, in my late-night wandering of the internet (whilst killing time before I have to go home and pack my townhouse up like a madwoman because WE MOVE TO THE NEW PROPERTY THIS WEEKEND, YAAAY!), I came across something interesting. I vaguely follow a few other plus sized equestrian groups on the internet, and in one, someone posted about how the manager at the barn where they kept their horse had made remarks about their body size multiple times, including to their trainer. The boarder made it clear to the manager that the behaviour was not okay and then chose to vote with her dollars and move her horse elsewhere. Most of the responses were positive, but there was one poster who told this girl she was 'thin-skinned'.

I'm here with a newsflash: Just because you are plus-sized doesn't mean you have to 'take' any commentary you wouldn't if you replaced 'fat' with 'ugly', 'dumb', or any other derogatory remark. And it doesn't make you thin-skinned to demand the respect you deserve, to vote with your dollars or patronage, or cut poison people out of your life completely without giving them a second chance.

Nobody would find it appropriate to leave if that manager was saying to the trainer "boy, that Amanda sure is dog-faced". Nobody would tell me I was thin-skinned for calling him on that behaviour, or for commentary about my intelligence, financial status, or attractiveness. It wouldn't be considered a knee jerk reaction to discontinue my patronage to that professional for repeated, unprovoked remarks about anything besides my body size. It's generally acknowledged that those are inappropriate things for a professional involved in a business to say about clients. But there is this ingrained idea that, as the plus sized set, we should not only expect but accept commentary on our bodies. And we 'shouldn't let it get us down', ignore it and move on with our lives.

I'm all for empowerment. Shaking off the haters. Acknowledging that some people are merely really awful people and keep on dancing. But that doesn't mean that you have to ignore their actions.

Let's go back...oh, maybe 15 years. I'm younger, softer, and less confident than I am today. I'm in a big box department store - the kind that doesn't have distinct divisions between 'straight' and 'plus sized' clothes. I'm minding my own business, flipping through jeans on a SALE rack.

An elderly man goes out of his way, cutting into the women's clothing section to speak to me. He says "Oh honey, you know none of those are going to fit you." He was right, but that didn't make it okay. I was so stunned I didn't say a thing. My mom, my hero, either overheard it or I recounted it to her moments later. She chased him down and told him, without being rude or aggressive, that what he'd said to me was unkind, unnecessary, and very rude. He was taken aback. I like to think that the next time this man thought he might dash some young teen girl's feelings, he thought about my mother calling out his behaviour.

People never change their bad behaviour if you never call them on it.

It doesn't mean you need to scream, cry, swear, or flounce (though if that's your jam, more power to you). And sometimes if you call someone out, it won't change their behaviour. But sometimes it will. In the case of the original poster mentioned above, she called out the behaviour both with her words and with her dollars.

Sometimes you won't have the energy to call out people's bad behaviour, and that's okay, too. I don't always have the energy or confidence to do it. You do what works for you in the moment, and what you are emotionally prepared for. But you need to know that you don't have to lay down and take it, even if society has convince you your body is 'lesser' or 'bad', even if your body-positivity mandate is that 'fat' isn't a bad word. And it's not thin-skinned to stand up for yourself.

More changes on the horizon!

On March 31st, we became the owners of this cute little house: 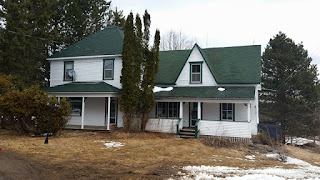 You might be saying "That's not horse related!"....BUT IT IS!

Because this house came with 10 acres of cleared farm land.

The plan has always been that eventually, G and I would be able to buy a place where my horses could come live with us, but neither of us expected this to happen so soon. Because of unforseen circumstances, my parents approached and asked if we would be interested in buying a house together. We jumped at the opportunity, especially with the little one coming in September -- we could have stayed in the city with one baby, but I am in love with the idea of raising my child on a farm and with the idea of multi-generational homes. I get along well with my parents as an adult and honestly, I'd be living with them if I wasn't living with G.

And I'm gonna be honest, I had reached a point where I wondered what the sense was in keeping my horses--I never see them (especially with how ill I've been this winter) and don't have the time or resources to do any consistent work with them.

So...as soon as the ground thaws enough to drive fence posts, they move in!

There is so much to do with this property -- there are no fences and no barn. On the one hand, it makes things a little more difficult, but on the other hand, we get to set it up exactly as we want it. I've never had that luxury before!

The house needs a lot of work inside, too. It has great bones and lots of beneficial add-ons done by the previous owner, but needs new flooring in most of the house and either paint or wallpaper in just about every room. The kitchen also needs a complete overhaul. It'll be a long, slow process, but I can't wait to share it with you guys! And I can't wait to have my feral ponies home to remind them of their P's and Q's.

I think that'll generate more blog posts for you guys, too. Even if I'm not riding, I'll definitely be inspired to write more once I know where those ponies are and can put my hands on them every day. And I think it's important to show the life-horse balance, too. So get ready to join me for some adventure this year! :)