Proof that it's not always pretty and wonderful...

For once, I am not bragging on Bronwyn!

I think sometimes I might put off the idea that Bronwyn is perfect and our relationship is without flaws, and if I do, I'm sorry - because I could have driven her somewhere and dropped her off for someone else to deal with this weekend! Despite my frustration, though, I learned a lesson or two - it seems when I am the most frustrated with her, I learn new lessons if I allow myself to calm down and consider the situation.

BUT before I get into the details, I wanted to make a big brag on my colt, Rex. For those who don't remember my colt, Rex, here is a picture of us from this summer: 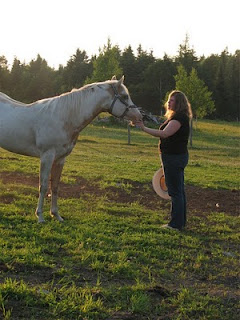 I do have some pretty photographer photos of him from my friend, Jilly, but I try not to post them so much because when I do, I get abduction promises - most of the time, I wish people would just follow through, lol - I can't stand the disappointment when everyone threatens to steal him and then nobody shows up with a trailer! Haha. Probably best to show him in his "natural state" - aka dirty, and with a mane that I have set out to pull several times but never finished completely - note the different lengths along his mane. He is a son of my Angel, and a half sibling to my mare, Ari.

Anyways - Rex has never left the farm (remember, until this summer, we hadn't had a trailer in a long, long time!) - I think I might have loaded him onto a trailer once when we had borrowed a friend's to haul a horse to the vet lab but it was an open stock trailer. We planned to fill our trailer with 36 bales of square hay for temporary storage so before we did that, I wanted to take advantage of the trailer hooked to the truck and load him a couple of times. He never hesitated at the ramp, but did at getting all the way in a time or two - but without too much coaxing or cajoling, he was soon jumping right in like "what else is new?!" - I think he is going to be a fantastic trail gelding... *cough* once I get around to getting him started.

So my bragworthy horse this weekend was Rex. Not Bronwyn. Not by a long shot.

We have been trying to slowly integrate our new mare, Robin, into our herd. She is in foal and we are VERY excited about the baby so want to take things as carefully as we can. To say that Bronwyn has been less than accomodating about the new addition to the herd is an understatement. I firmly believe her obnoxious insistence on segregating her herd from anything or anybody potentially harmful (and yes, she will sometimes herd them away from me if I am trying to catch one of the other horses) stems directly from never having held a position of "importance" in a herd before. She isn't, by any stretch of the imagination, the "alpha" mare in our herd, but she likes to think she is, and takes it upon herself to do the things that Jessie (the REAL alpha in our herd) is too smart to expend the energy on when she can send her goon, Bronwyn, to do it instead.

After an excitable morning of some "faux alpha mare drama rama", I went out to catch the mares to come in for the evening - I was down with a cold that, while it didn't knock me flat on my back, did make me pretty draggy most of the weekend and I had had a long day of cleaning up and doing pre-winter chores. Though the mares were close, none of them wanted to come in so I started the task of collecting them one by one. I always start with Bronwyn because of her aforementioned tendancy to herd the other horses away from me. She was not always (and still isn't) an "easy" catch but I can usually track her down within two or three minutes with Julie Goodnight's method, slightly modified.

So I started to track her down the way I typically do - assertive forward motion toward her shoulder, steady, even pursuit. Bronwyn doesn't typically do the stopping and looking at me at all until she is completely done and ready - I can then approach her and halter her, etc. Instead of her walking or trotting away from me, I was met with a lot of this:

In all seriousness, I was out there for about 30 minutes, with THIS going on. Here's the kicker - I figured out "the big amazing lesson that Bronwyn has to teach me" about 29 minutes into it.

The more she moved, the more agitated I got - while my BODY was still doing the right thing (steady, consistent approach), my BRAIN was going "that HORSE... when I get my hands on her... I should work the CRAP out of her because she's working the crap out of me!" (and on and on, as it goes). You're right, that's a big fat dose of PRIDE going on there. The more angry I got, the more wound up she got, even though my body didn't change what it was doing fundamentally. I am willing to bet that the energy I was giving off STANK to the high heavens.

Finally, I checked myself and said "Wait a minute. What was that 'golden rule' my parents taught me? Ah, that's right - 'never take your emotions into the saddle'." While I am pretty good at not carrying emotions INTO the saddle, I sometimes develop emotions while I am in the saddle, and I am not known to void myself of emotions when doing ground work. There are a lot of things I have been super patient about with Bronwyn, but then there are some things (like the battle we had in August over trimming her ears that I was too embarrassed to post about because I was being a horrible, horrible person and knew so many of you would call me for letting my emotions get the best of me) that I just decide to prove my point over my hurt feelings and don't stop until I've made that point, regardless of the cost.

This was one of those times. I was going to chase her until she fell over from exhaustion unless she stopped and let me catch her. One way or the other, as I told my father, "She is GOING TO BE CAUGHT. DO NOT let her run in the barn!". Once I realized what I was doing (I would suspect instead of the typical approach, she was feeling me more like a heat seeking missile that wanted to decapitate her), I straightened up, dropped the 'tude, and guess what? 30 seconds after I dropped the emotions out of it, she let me catch her.