Two weeks worth of updates!

You are all going to get Internet cookies at the end of this because this run down of the last two weeks is going to be a long one!

Just give me a minute here, I need to mentally rewind... (that high pitched noise you hear is me rewinding my memory like an old fashioned VCR).

So rewind back to September 17th. I had vacation planned because my birthday was coming up (Monday, the 20th... a whole quarter of a century old, ack!), but things got waylaid earlier in the week when my sister's heart dog (German Shepherd with past issues of neglect and aggression that we have spent hundreds of dollars and hours trying to fix) had a lapse in her "good dog" behaviour that had been pretty consistent for about eight months, and attacked my sister's 17 pound miniature Australian shepherd. If the aggression had always stayed with outside dogs, we could have managed this, but unfortunately, when it happens within your 'pack', it is way more difficult - this was the third time we had had such an incident and unfortunately, my 17 year old sister had to make the completely unselfish decision to put her "Boodleschnitzel" to sleep.

I have mentioned here before how amazing and awesome and wonderful that I think my sister is, but I should mention it again. Everything inside of her was screaming that she couldn't live without Bella but her common sense won over and she made a difficult decision. Bella was put to sleep on the farm with Shay and I holding her tightly and telling her what a good dog she was. I still get teary thinking of it!

Bella spent her last morning romping in our back field with her two best friends, Psyche (Shay's border collie) and Morrie (my 35lb mini Aussie). Here is a picture that I snapped of Shay with Bella and Psyche that morning: 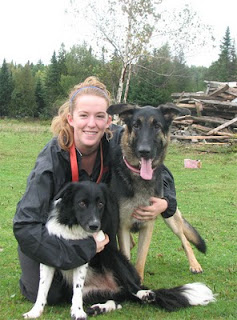 I am so incredibly proud of her for making the right decision, even though it wasn't easy and it was breaking her heart. Bella's remains came home this past weekend (we had her cremated) and I think Shay is doing really well coping with a big German Shepherd sized hole in our household. She knows she did everything she could and we had well and truly exhausted all of our options over the last three years.


The next day, Shay took off for an agility trial she had planned - while all she really wanted to do was curl up and grieve, mom insisted it would be a better idea for her to go with Psyche to run agility and try to take her mind off of things. I would have loved to have been with her, but we had already planned (months ago!) the very first event for our local "Draft Under Saddle" club - a trail ride and potluck!

There was some road riding (about 1km at each end of the trail) that worried me a little bit, but I have to say that Bronwyn surprised me as she always does and took to it like an old pro. We rode at the back, we rode mid pack and we rode at the front, and even were overtaken by a group of motorcycles at which point - I was bracing for it to hurt, Bronwyn didn't even bat an eyelash! 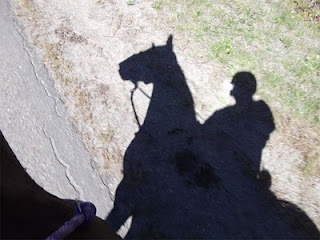 You can see the rest of the album on my Facebook here.

We had a complete blast - Bronwyn was actually one of the smallest horses there, and got made fun of for her small hoof size and the fact that though I am 6' tall, I had to look UP at a lot of the riders, haha - with the exception of the Newfoundland Pony and Standardbred that were with us!

Overall, I was so proud of Bronwyn. She had her first opportunity to really ride on the road, in a group, be overtaken by traffic, ride close, through a deep wood, and stand tied to a trailer, and she took everything in stride. It has started to occur to me that "Hey, I have a fun little horse that I can take places and not worry too much about!".

That Monday, the 20th (my birthday), my father had his long awaited surgery for his torn rotator cuff (he tore it back on June 22nd and worker's comp has been trying to get things back in shape via PT - when it became obvious that it couldn't be done that way, they scheduled the surgery). All along, he had been doing things in the barn as well as he could with about 1.5 arm's worth of value... since the surgery, he is up in a sling, so one armed. Things got a little crazy with getting up at 6 to get chores done then getting home around 7:30pm and doing chores and all that silliness. I rode Bronwyn a grand total of maybe three times during the week and once it was more or less in the dark, and then we fast forward to this past weekend - Bronwyn's first show under saddle!

This marked a first for me, too - which is hauling a horse. I have traveled with many a hauler in my lifetime, and ridden enough miles in the passenger seat with a horse trailer behind to have a pretty good grasp of how you are supposed to drive with a horse in the trailer... but it certainly is different when you have your baby behind you! Dad came along with me for moral support but due to his surgery, but could not drive (though he did take his sling off and back me out of a sticky hole I had driven into when we were ready to leave)... it was really helpful to have him along because, well, I am a chronic worrier. I hear a tiny bit of movement or feel it and I am freaking. It was nice to have dad along to kind of go "that's okay, she is just readjusting after this turn".

Bronwyn is truly becoming an old pro at this trailering thing. She loads up pretty quickly - the only thing I don't like is that I can't get into the compartment ahead of her and make her back down slowly - we remedied that by removing the chest bumper when I am ready to unload (ours were just bars so we replaced it with rope, bolts, and a pool noodle. It won't stop her if we were to stop hard, hard, hard, but it's a nice soft place for her to balance) and I walk back with her telling her to be easy.

Anyways, I am getting off on a tangent! THE SHOW!

It was held at Callandar Hall Equestrian and organized by a really fantastic gal named Leah who was super, super helpful and really supportive to me. Their fall training show, she told me, is the biggest event of the year for some of their students, so I was pleased to be able to take part in it. She somehow convinced me to enter something called "pole equitation", which... well, I had no idea what it is and Bronwyn had never seen ground poles, so... total cinch, right? We went over a ground pole in the indoor arena while warming up a couple of times and that went alright, then went up to the main ring.

Surprise! They were between standards... like real, actual jumps - just with the bars all knocked. Oh my!

The first pole... well, I don't have a video of that, but she clipped it with her front hooves, I think, and rolled it up her back legs and then took a big jump and scared herself (and me, a little). I told Leah "I don't know if we can do this". Eventually, we worked through things but not before she did what one of my Facebook fans called the "politest refusal ever":

We were only two in the class and I won it - but I think it's mostly only because the little girl I was against had a hard time remembering the pattern. :)

We then participated in green horse w/t - which, well... let's say Bronwyn was more green than the other horse in the class (!), and then an intermediate rider w/t/c. Bronwyn had pretty much lost her mind in the green horse w/t class (rushy, pushy, and ignoring many of my aids), so I was riding very... um... proactively and aggressively in the w/t/c class and it's hard to have good equitation when you're having trouble with your horse! When they asked for the canter, she picked up the wrong lead (for the first time, ever - seriously), and the three good strides she got at the correct lead were, fortunately, right in front of the judge. I placed 5th/6, and I kind of feel like it might have been a pity placing so I didn't feel like I got horribly beaten by every child in the class.

From pictures, I recognize I need to get my hands up out of my crotch! 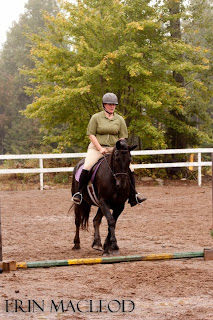 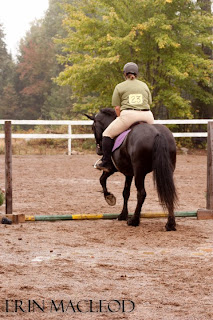 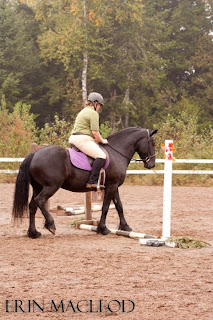 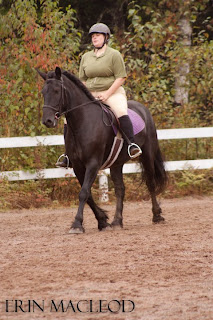 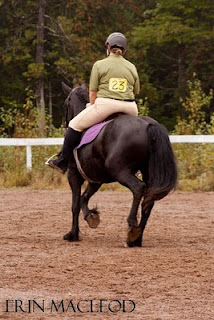 And the good one - mid poop! 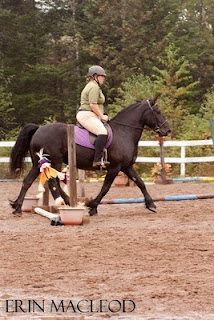