Tonight, I stepped outside just in time to see the most brilliant shooting star. It streaked across the whole sky, leaving an ethereal trail behind it. It was not like the shooting stars you see more commonly that are just a flash that leave you wondering if you actually saw anything at all - no, it was the kind of star that left an impression, and made you absolutely sure that it was real.

I mentioned in my post, The Horse That Changed Your Life, that after Angel died, I saw a lot of shooting stars. They became less and less frequent as I healed... but it has always seemed that if there is going to be a shooting star, I just happen to step outside just in time to see it. Very convenient. Tonight, I stepped outside to grab the mares from where they were stuffing their faces around the remnants of a round bale we just put in a couple of days ago and just so happened to look at the right part of the sky to see that beautiful shooting star.

Angel has been on my mind a little lately - or things pertaining to her, anyways. I have been thinking a lot about Rex and Ari and the role they play in my life. There have been times that I have considered selling one or both, or leasing them out or something so that they are being used more than they are being used here because of my emotional hangups. I just know I can't. They were both on the sales market before I lost Angel and through dealings of fate, they are both still here. They are meant to be in my life for a reason.

With that said, I am nearly convinced to back Rex within the next couple of weeks. He is all the way there - I have taken him through all the steps over and over and over again - all that is left is for someone to get on and ride. He is bigger than Ari... I still have that hang up over her... maybe I can ride him and start to see things in context. Either way, I know that Rex needs a job and will be much happier when he can put his head down and go to work.

Sometimes I really miss Angel... who am I kidding? Most of the time, I really miss Angel. She was what I needed when I was 16, and she saved my life in many ways. (Okay, okay, I know it's so cliche to talk about your horse saving your life when you were an angsty teenager!) She started me on the path to weight loss. She started me on the path to my passion for horses.

And every once in a while, she shows up again to let me know that I am going in the right direction. 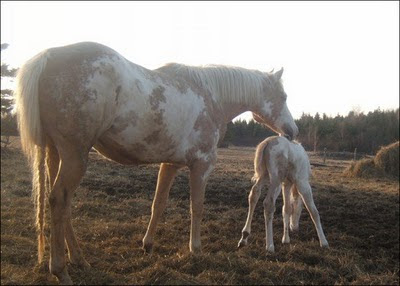