Tonight, instead of riding, I did something I had been putting off for a long time because I have not been fit enough or had enough ambition.

Bronwyn is relatively good for mounting up, for the most part. Quite regularly, since I mount up from a mounting block (read: overturned bucket), I will stand on the bucket with my reins gathered up, collecting myself to put a foot in the stirrup, and while I do this, Bronwyn fidgets a step back. Usually, I hop down off the bucket and back her up several steps, then bring her back to the bucket.

Fortunately, I was too exhausted for that.

Sometimes, I think, when you're putting training on a horse and you don't do it for a profession and your horse represents a lot of things, least of which is the freedom to break stereotypes and do things that people have told you that you couldn't, it is hard to not take it too personally when your horse does something that is just stupid. Bronwyn was being pretty stupid. The long walk in the mucky cold back to the barn seemed to simmer me down a little bit.

I knew I couldn't really put work on her in the mood I was in, though. My parents taught me to be a considerate and conscious horse person and I know as well as anyone that you can't take anger, anxiety or aggression into the saddle with you, least of all on a green horse.

I did saddle her up, took her back up and worked her on the longeline. Then, I turned my bucket over beside her and spent a lot of time just standing on it (funny enough, she has no problem standing still if I am mounting from the ground and someone is holding the stirrup on the other side), praising her. I then mounted and dismounted four or five times - sat on her, never walked off a step, just mounted and dismounted.

I have always told myself "when I am more fit and can do it more easily" that I would do this from the ground, from both sides, until she got so tired of it that she was sleeping when I mounted up, but I finally found the ambition (or adrenaline via being angry?), and am glad I did it. By the end of it, I was even putting my foot in the stirrup on the OTHER side and she was standing still and behaving really well. So, I didn't ride, but I got my point across without harming our relationship, and I'm proud of that.

THAT'S a problem that plus sized riders and "skinny" riders alike, face! Sometimes, I think it would be nice to be detached enough from your horse emotionally that you could not get a little butthurt when they start acting foolish, but then I remember how nice it is to have such a connection with your horse - to remember what they have come through from the beginning and to be proud of what they have accomplished, even if it is as little as standing still while being mounted.

I could have done a lot of damage if I had gone through with my original plan to work the bajeesus out of her. I guess this is just a little PSA.

And also - I happened to be in the right place at the right time today and nabbed a work harness for Bronwyn at a livestock auction today for $50. It has been well used, but also cared for quite well, just missing a piece or two. We tried it on my three year old percheron cross filly tonight, and will likely try it on Bronwyn tomorrow in the daylight. I will grab a picture of THAT! 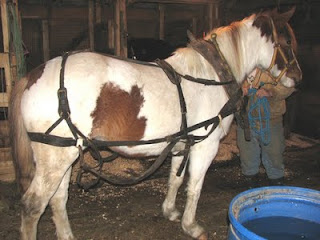