Wow, was this ever... something else. It had been about seven years since I had last shown a horse - and that would have been Angel, my palomino and white APHA mare that I lost four years ago to the day on August 28th, the day I was showing Bronwyn. I think there was a big bunch of emotion kind of causing trouble, which is the big reason why I was so nervous, but it fortunately disguised itself as nerves and excitement instead of grief so I managed to make my way through the weekend without too much trouble.

First of all, I need to say - my sister is great. She is 17, for those who I haven't already drilled that into a bajillion times, and I have to say she is one of my best friends. We are so alike that she can usually tell what is going on in my brain - so when she volunteered to stay with me overnight, I was stoked.

I ended up having a wild and crazy week (my best friend of TWENTY YEARS (holy cow, we're getting old!) was visiting from far-far-away and I wanted to spend as much time with her as possible) and so was completely unprepared come Friday morning to go show the next day. My horse hadn't been bathed in three weeks (!! When you show paints, which I used to do, bathing the night before a show is verrrrrrrry important!), I had absolutely NOTHING packed. By the sheer graciousness of her wonderfulality (yes, I made that one up on my own), she agreed to pack my things so that I could just wrap my horse, load and go once I got home from work Friday night. I sent her a list (her: "this is NOT A SHORT LIST!" me: "Did I say it was a short list? Sorry!") and she laundered, folded, packed, loaded and rolled (bandages!) all day while I was at work. When I got home, all I had to do was put on my boots, wrap my horse and load her.

So, I put on my sneakers, wrapped my horse, and loaded her. (Do you see something missing here?)

Annnywhoo... she gave me a little trouble loading (granted, this was only her second trip out), which was only exacerbated by the fact that I was supposed to meet my farrier at 8:30 to trim her feet up a little to make them look spiffy, but we eventually got her on, my dad in the truck, myself and Shay in the van and we headed out. She hauled easy, like she did last time - she's actually a lot more levelheaded than I often give her credit for - and unloaded easily. Even though it was dark when we landed, she was relatively quiet and at ease - not terrorized. Farrier rasped her feet down and shaped them up for me, and we put her into her stall. 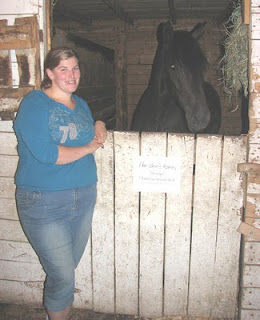 It was her first experience with an open top stall, and the first box stall she had been in in a while - so naturally, I was anxious - was she going to try to jump out over the door? Was she going to spook and freak and tread all night?

I started to relax when she finally felt comfortable enough to poke her head over the door and watch the goings-on - she was really zen - dad thought we ought to have the top door closed but I thought it much better for her to be able to look around and take her surroundings in. When she got zen, I started to get zen! (Thank goodness!) 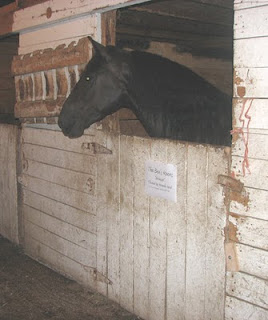 Originally, we had planned to pitch our tent and sleep in the tent but ended up getting an extra stall and sleeping next door to her on an air mattress - it was the only way I could sleep well, and I slept light, heard everything she did, but felt satisfied knowing that I was right there in case anything happened. The next morning, we got up bright and early to find that Bronwyn wasn't as dirty as I had thought and I could make do with just washing her tail and taking a damp shammy to her hooves, thank goodness!

And so this was the turnout: 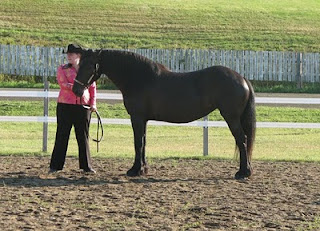 (Not too shabby if I do say so myself! The horse, I mean!)

We were entered in halter mares, which was the first class, and open showmanship (I realized after the fact that I probably could have entered novice instead of open and not been against, oh, you know, professionals!). I didn't expect anything out of the halter class as it was also an intro QH show, which means open classes AND pointed AQHA classes, all judged by an AQHA judge. Very graciously, the judge used Bronwyn and put her 5th of 7, above even a QH! (The only other non-stock horse was a percheron/QH cross!) 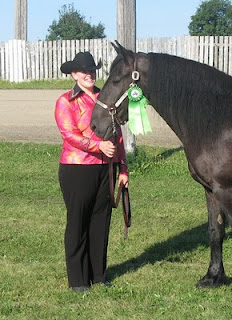 (with our snazzy 5th place ribbon!)

Besides not being able to set up too quickly, and giving me quite a lot of trouble right up until the point that the judge came to inspect, she was really well behaved - the proximity to the other horses didn't bother her and she trotted out and walked alongside as I asked (she has a tendency to enjoy walking single file behind me when I give her the option). I didn't expect a ribbon, but it was a nice touch! Unfortunately, they didn't have the horse names/numbers, so they just called by number and they didn't announce her rad show name (The Bee's Knees).

Our next class was showmanship. I notoriously hate showmanship because pattern classes like that depend on the handler and I have never given myself much credit as far as polish and snazz go. 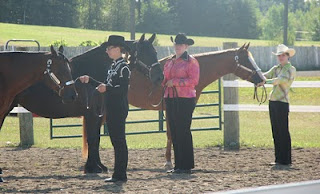 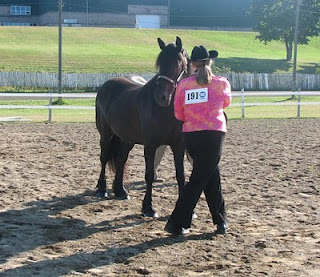 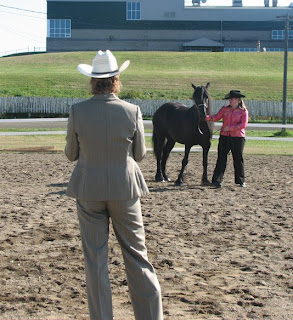 Yes, she bent in my 180, and yep, I actually had her stood up that way for inspection, and I still managed a 3rd out of 7. They combined this class with an AQHA class, so they called two placings and when I was not in the open placings, I left the ring. Shortly thereafter, the steward came running up to tell us it had been an error (I was not upset about not placing, I felt like I was a hot mess in there, but I was disappointed that they never got to announce Bronwyn's show name over the loudspeaker!), and I had actually placed 3rd. I felt bad for the people I bumped out, but... um... hello, ribbon! :-D Haha. 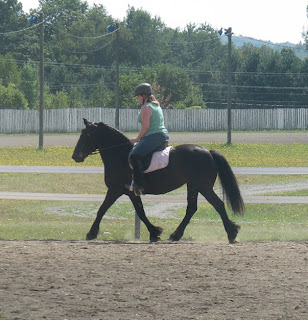 After that, we puttered around in the warmup ring under saddle - Bronwyn did not think that the cannibalistic horse wearing a hood was funny, no matter how humorous I found it to be. Then she cooled out, we loaded up and she jumped right on the trailer, much to my delight. Trailered home like a pro. All of my nerves were useless - she was an absolute superstar!

Sunday, we went for a nice, relaxing trail ride with Shay and she got a bath... have I mentioned lately that I love my horse?

But the big moral of this story is that... even after 7 years off... even being a hot mess with a horse that's not the "right breed" and a body that doesn't quite fit in (check out that showmanship lineup, man was I out of place!)... you can still have a freaking blast - I hope everyone has these same kinds of local open shows you can go to and show and HAVE FUN at. If not, find them!
Posted by A at 2:53 PM