Bronwyn got a big compliment from my father tonight. We were talking about the five that we have, at various levels of training (including with no training)* and how we really needed to get some rides on some horses and he said "Well, we only have one broke horse in the barn."

Typically, I think of my sister's mare, Jessie, as the "broke horse" on the farm (sad, they all should be!). She is about 11, and though she's not a finished show horse, she is pretty easy going and you can post most competent adult riders on her. She is a little sensitive and can be quick but generally gives very few issues to anyone.

He was talking about Bronwyn, he told me. He figured she was a more willing horse to work with than Jessie who gets touchy about mud puddles and long reins tickling her legs. Bronwyn, though she isn't a horse that anyone can ride, probably IS the most "broke" horse we have on the farm and that is still a long way from saying much BUT that is not the point of my entry. The point of my entry is what a success it was to have a compliment paid to her by dad.

Though he has been on my team for a while, I did get a lot of flack about Bronwyn from the very beginning. I originally intended to get her, break her, and resell her (Imagine!).

She was so scared and jumpy when she first arrived that she could border on dangerous if you happened to be in the wrong place at the wrong time (I was only there once or twice and lived to tell the tale!). She was wary and mistrusting. She stood in the back of her stall and blew like a jake brake every time someone walked by. If I could get my hands on her, she would tolerate brushing and handling but you could tell that she was counting the minutes until it was over and she could do her own thing. I sat in her stall for hours, hoping to get her used to me and to "bond" with me but it never happened. She ran through my hands several times when I was trying to teach her to longe (before I got my round pen), and got sticky feet when leading.

During that time, I was reminded again and again that she was "dangerous" and that I was going to get hurt, and neither parent could understand why I insisted on keeping her when I had two other perfectly good horses (the not-fat horse posse) that I could use, plus some of theirs (including a 15.1hh stallion that was a more than worthy mount). I spent lots of nights, tears, ponderings, considering if I should just give up. I was ready to.

I spent six long months trying to convince Bronwyn to engage with me and be a willing partner. In the end, I had to think outside the box - way outside the box for me - and began with the clicker training. THAT was her language, food was her currency and eventually, we struck up, if nothing else, an uneasy partnership. It grew over the spring and at the end of April, 2008, with a small assembled group, including both of my parents, I rode her for the first time.

My dad told me: "When you got on her and I saw that you trusted her and she trusted you, that was enough." - I haven't heard a negative word since, even though dad and Bronwyn have frequent disagreements and still butt heads.

When Angel died, dad told me the same night that everything happened for a reason, whether we understood it at the time or not (I didn't, and I hated him for saying something so foolish). Bronwyn is my reason.

Who would have known that that crazy, sad, lifeless horse with no personality and no interest in partnership would turn out to be that horse that gives me the evil eye if I don't at least pop in to give her a kiss when I am in the barn... the horse that will look at something scary skeptically and say "I don't know, mom..." but when I insist, will say "okay, mom, I trust you."... the horse that has a huge, overflowing personality and great work ethic, and really, truly, desires to engage with her chosen partner? She shone up beautifully, like obsidian hiding under the tragedy of the circumstances she endured in the months prior to the two homes before me that got her out of it and began to bring her around.

I can't take 100% credit for the horse that Bronwyn is... just like I can't take 100% credit for the person that I have become. Bronwyn did that... and my life is so much richer for it. I had an appointment with a banker earlier this week and as I spoke to her and explained what I needed, she looked at me with a wise look and said "You really sound like you have a good life." and I said "I really, really do." - and none of that would have been possible if I hadn't stuck with it - with everything over the years. 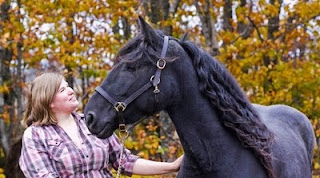 Ladies... stick with it. The road is not always going to be easy. There will be bumps and bruises (and rope burn!) and you will likely shed a tear or two, meet closed doors, and feel completely hopeless, and want to back out... but find yourself a good support system and work through it. You deserve it!

* I have horses because I love horses, not necessarily to ride. I am perfectly fine with the idea that some of mine aren't broke right now though they are all riding age. :)
Posted by A at 11:40 PM