You know when something belongs on your bucket list but you've never put it there because it doesn't occur to you that it might be a possibility or something that you could make happen? Yeah, that's what seeing Dr. Temple Grandin speak in public was for me.

When my mother and I found out that she was coming to Truro, NS, about a four hour drive from my place, and we could head out there while combining a trip to make connections to a new forever home for a dog, it was a pretty easy decision for me to reschedule a dentist appointment and postpone a nacho night, since this was a once in a lifetime opportunity.

As the daughter of a livestock producer (small scale as it is), I have particular interest in her influence on the welfare of meat animals, and as 50% of all cattle and pigs being slaughtered in North America today are being slaughtered in facilities that employ her strategies, that's kind of a big deal. She has a unique way of looking at the processing of commercial meat without attaching emotion to it - while still employing empathy.

Dr. Grandin was in the area to attend a conference on autism as, if you weren't aware, she is one of the most recognized adults with autism and, in addition to her work with animals, is a well known author and "inside voice" about issues surrounding the autism spectrum, but is a friend of the former Nova Scotia Agricultural College (now the Dalhousie University Faculty of Agriculture) and insisted that she get a chance to "do some animal talks" while she was in the area. My mom is an NSAC alumni (she took a course called "Horse Care", hehe).

When Dr. Grandin spoke at the NSAC campus a few years back, it was the first time that the 400-seat Alumni theatre had been filled to capacity, which we didn't know. We were dawdling around town after making connections to deliver the dog when a friend of mine living in the area advised me that we should get to campus if we wanted to be able to get a seat, since an hour and a half before the doors even opened (which was 30 minutes before the talk was to begin!), there was already a line up. We motored over and found a line around the corner of the building, 3 or 4 people wide in some places. I hopped out of the car and mom went to park it. By the time that she got back, the line had doubled. 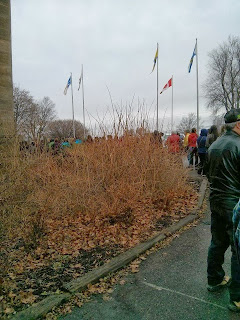 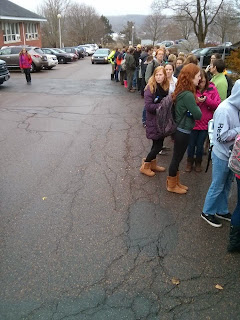 And the line got longer after that! We filled the Alumi theatre (we were fortunate to get inside), and they set up two on campus locations for people to view live streaming (and it was available online as well). It looked like the satellite locations to watch live streaming were pretty full, too.

We got in and settled in and I couldn't stop grinning. Dr. Grandin received a standing ovation when she took the stage. It was clear that I was not the only person THOROUGHLY STOKED to see this legend in person.

She was exactly like you would imagine her to be - from her enthusiasm to her outfit to the no-nonsense common sense information that she provided. From what I could gather, she had given a talk to livestock producers earlier in the day that would I would have found really interesting in addition to the lecture she gave us on animal behaviour and how to prevent fear memories in animals.

After the slideshow and lecture, we  moved on to the Q&A period, which she clearly was looking forward to (and I sometimes felt like she was pushing through the slideshow specifically to get there). The passion and enthusiasm that she spoke with made it really evident how invested she is in the well being of animals. She got another standing ovation when she left - and because we had a long trip to get home and the crush of people moving up into the foyer to have books signed by her was, quite frankly, overwhelming, we headed home. (Also, secretly, I did not want to "fangirl" in front of her...)

If you're interested, they put the primary talk on Youtube, but sadly didn't include the Q&A, which, in my opinion, was the best part!