I promise I will have a "real" entry here soon! In the meantime, I wanted to mention a couple of things!

Many of you who know me on Facebook and on the forum already saw this information, but I took Bronwyn to her first parade on Saturday! She hasn't been off the farm since I got her three years ago, and this was a local community parade that took off not far from home - so I walked her to the event (even though we have a new-to-us trailer we have yet to christen with it's first ride, see below!), in the parade and back.

She did GREAT. I was soooo pleased, and we won 2nd out of 6 in the horse division, and beat a cute kid on a pony with dixie cups sewn into her mane. I did put some thought/effort into my presentation, though. The theme of the parade was "Colour Your World"... what do you do with a BLACK horse that needs to be colourful? Why, dress it up as a My Little Pony, of course! 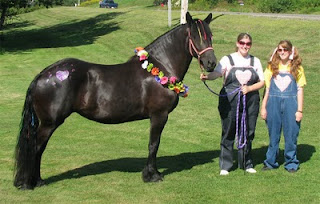 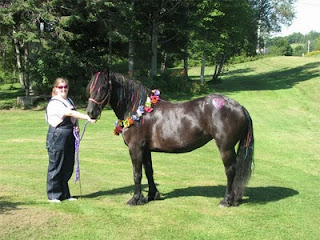 And - the loot! We won a Calgary Flames tshirt, and coupons for an ice cream sandwich & bag of chips at the fair, as well as a free A&W root beer. Do I now get to say I own a prize winning horse? LOL! 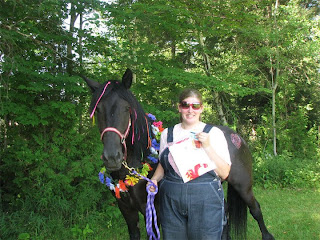 About the trailer! It was a complete twist of fate - most who know me know I have been on the hunt for something for a long time but my budget is very tight and it is hard to have appropriate trailer + money + time all in the same place at once... we stopped by per chance to visit an old friend of ours from the horse world and about a week later, came home with this: 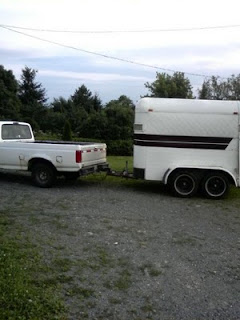 It's not much, but it means I no longer have to live in horsey exile - so when we plan for a show, we can now go to one! (And psst, we have one planned for the 28th, which I will appear at, come hell or high water!) We live about 30 minutes from anyone else with horses and aren't on the way to anything else, so trailering costs minimum $75-$100, usually more. Finally, I can just say "hey, let's hit the trail in the next town" and be able to do it!

And last but DEFINITELY not least, I guest blogged this week at my friend/cousin/sister (I don't know what to call her but I love her dearly!)'s blog. She is in the process of starting up a really cool women's gallery and meeting space in Toronto... it is an admirable and super inspiring project and she had guest bloggers all month. I blogged on Saturday the 14th. You can check it out here: