Just a note to say I feel like a dunce.

In my brain, I have had images of laminitis, long term treatments, chronic lameness and a pasture sound only mare over the last two or three days.

I soaked her last night because I figured it was an abcsess - or at least that was what I was determined to decide that it was because the other options were too scary and daunting. After that, I brought her out into the yard to take some pictures of her feet as some members on a forum I frequent wanted to see. She was MORE lame than before, so I figured "hey, abcsess is drawing out!". Squared her up to take some pictures of her (mostly to prove that she can't be obese enough to be laminitic - or that was my argument anyways), and then lifted the "bad foot" to brush it off and take a picture of the sole.

After some digging with my bare fingers, I discovered a small black crescent shaped rock lodged in the spot where her frog divides toward the heel. I had looked over her feet time and time again looking for something but never noticed it. The soak must have drawn it out a little - dug it out and there was a bit of a hole, so we're going to go aggressive to avoid any infection. Why did my farrier miss it? Because it appeared to be a natural part of her hoof! I missed it for days.

I've never been so relieved in my life! I was completely ready to pursue aggressive treatment for whatever lameness she had to figure out what was going on with her, etc. Boy am I ever glad I didn't call the vet out and run up a few hundred dollars' worth of diagnostics bills! Hopefully she will be right as rain within a few days - I'm going to keep soaking her to keep it clean and keep some dressing on the hole to avoid infection.

In the meantime, here is a picture of her *sad face* "Why do you torture MEEEEEEE?" last night while I was soaking her. Yes, there is too much water in there - I was trying to get the temperature right! 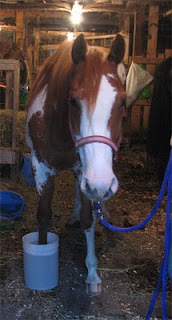