O Canada... You're Snowy And We Freeze!

Today, the weather is about -7 Degrees Celcius and in the neck of the woods where I live, we have about a foot or so of snow on the ground. I don't have an indoor.

With that said, I have been braving the chilly weather lately to ride my horse in snow up to her knees and try and at least keep her in minimum shape to really start the work in the spring when the snow finally goes away and we face another adversary - MUD.

I posed the question about how to work my horse in the snow on a couple of message boards and the resounding answer was to work her in it! It fits them up well! She'll be well conditioned! I think most of those people, when thinking about snow, weren't even thinking about this much snow: 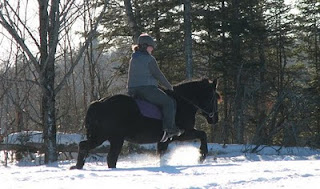 Yes, some of it is as deep as up to her knee. I feel immensely guilty parking my fat butt up there while she works it out! With that said, we punched out a path pretty quickly and stuck to that, but how on earth am I supposed to do any lateral movement, any bending, any moving off of my leg in a 1 foot wide path?!

I have a feeling that by spring, I will have a very strong, well conditioned horse that has forgotten all about suppleness and bending and moving off my leg and rein.

(I kid, I kid! I actually rode her today and she was not too bad at all. She was collecting up (at a walk!) and we worked on some other things. She had a few moments where she wanted to push out of the track and go straight for the barn but soon figured out that I was going to block her with my outside leg, and if she insisted on doing that, we were going to continue working. Yay for work ethic! I rode for around 25 minutes before I froze and she was getting warm (and wet), so I put her away.)

My father has borrowed the neighbour's snow blower for his tractor and there has been mention of building me a little rectangular space in which I could ride. My only concern is how the footing might get sketchy once we've gotten it beat down well. I could get sand and keep it well sanded - and we're not going to be doing any rodeo maneuvers or airs above ground (God willing!), so that might work.

What do you all do for riding in the winter if you don't have an indoor arena to ride in? In the past, I have mostly let my horses have the season off, sometimes hopping on for a little ride in the snow but nothing strenuous. I highly suspect with a winter off, Bronwyn would soon be much too wide and fat for any of my equipment, and may or may not forget most of the things she has learned thus far. My plan is to haul her somewhere with an indoor arena (my coach told me she always has a stall available for me) in or near the city I'd be working (I am a seasonal worker but looking for full time work), but I can't afford months and months of board, so it would likely be a one or two month deal. My coach also said I could bring her up for a weekend and use the indoor that way - but I have no trailer (yet), and it is expensive to ask someone to haul me an hour and fifteen minutes each way in a weekend. Hopefully I'll have a trailer before summer so I can remedy all of this.

How many other winter warriors do we have out there?
Posted by A at 12:05 PM