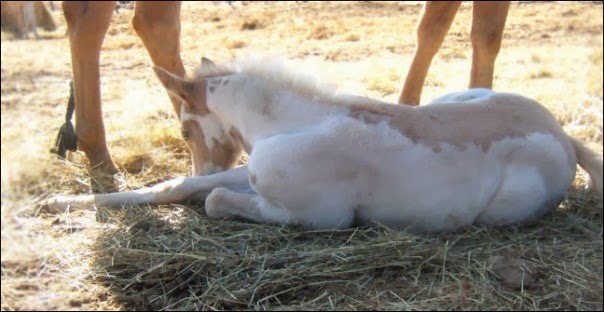 It's Throwback Thursday - a day where everybody likes to post pictures of yesteryear. I think it's cool to take a trip down memory lane so my TBT picture is of Rex. He would have been a couple of months old in this photo - taken in spring/early summer before his mom died (so this would have been 2006). He was such a cute babe, all boy!

He's a grown man these days, grown and with an opinion, as my trimmer, Z, can attest to based on her experience with him yesterday! As far as the trimming goes, I have been having him trimmed with the barefoot performance trim that Bronwyn has been trimmed with for a while. He took some time for his feet to start looking like much but with some changes to his feed and some time, he is finally starting to slough off some old sole and his feet are starting to look great. Bronwyn was kind of a pro in that area, since she had pretty awesome feet to begin with. If I remember correctly, it was only a couple of trims in when she started to have that same kind of growth/development that Rex is now having.

As a side news note, I also got to spend a bit of time with Lola, working on a couple of skills. Z trimmed her feet (I was quite proud of how she behaved!) and we tied her for the first time. I think being good about being tied is perhaps THE most important skill besides "personal space awareness" that a horse can have (incidentally, I believe that tying helps develop that as well), so I like to teach it young when I can. She was a bit sooky about the whole thing, but overall, did better than I originally anticipated. She shoved her head in her empty feed bucket and tossed it a bit and then stuck her nose in it and chewed air when she realized that she was tied and couldn't go anywhere, but no real freaking out. We kept the session short because I believe in multiple short positive training sessions (in pretty much any context) are better than long, roller coaster type ones, and then we will eventually build time. She will, at some point, probably closer to spring when she gets too big for the little box stall she's in, stand tied overnight like the rest of the gang, and out for the majority of the day. And as soon as some of this snow goes away, we're going to work on loading on the trailer!