Fall is honestly my favourite season for the things that Bronwyn and I love most - hitting the trails, usually with buddies. Annually, my group of friends get together for what was originally a "draft under saddle" ride, but what I have now affectionately dubbed "The Clyde Ride". This year, I added another big group ride, and a couple of rides by myself.

I have honestly not had much of a chance or motivation to ride since I moved Bronwyn home to the farm. It gives me a lot of different feelings about what I could be doing differently as far as where we are in relation to her, but at the end of the day, I have to keep reminding myself that each day that passes brings us closer to the day when she will be in my back yard and I will be able to saddle up anytime I want. It keeps me going.

Annnyways. A friend of mine, Nicole, has recently gotten into long distance rides with her arab, Kizz, and coincidentally both has miles of beautiful trails around her property and is only a 15 minute trailer ride away. She wanted to organize a large group ride at her place so set the date for the 20th of October. Unfortunately, it called for rain so she postponed and to avoid a wasted beautiful day the day prior, I went over to try the trail out just the two of us.

It was a really great day and we covered about 14 miles in around 4.5 hours. We took much of it very slow since both Bronwyn and I are out of shape, though we did do a few small trot and canter spots.

I should be pretty honest about cantering... I would be lying if I said Bronwyn and I had it all together. It is an unfortunate spot where she is both unbalanced and incredibly powerful and forward at the same time and with myself as out of shape as I am, it is rather intimidating in the arena. Needless to say, cantering on the trail without the support of the rail and not really knowing what we would come to around the corner... definitely intimidating. It went SO WELL. The first time, I was kind of in awe, the second time, I laughed hysterically while we did it. It was nice to feel so FREE - she felt like she had herself together, and I could appreciate the power of her canter without being afraid my saddle would slip or that I'd land on a rail and break ribs (seriously, my worry-train is crazy).

Overall, it was a pretty awesome ride and we really enjoyed it! Both photos are courtesy of Nicole! You can see where she wrote about this ride here. 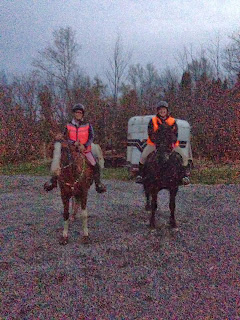 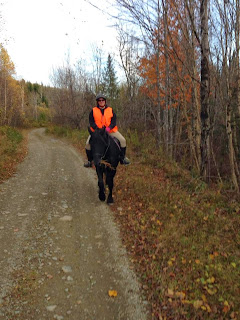 I gotta say... after this ride, I was SO SORE. It started in my legs, went up to my back, and my butt stayed sore forever. Bronwyn recovered easily, never took a sore step. Heck, her ears were still perked up at the end of the ride, I think she could have gone longer if she needed to!

The following weekend, the weather turned out just fine and Nicole hosted her ride on Saturday, the 26th. It was attended by a varied group of people, including members of the local distance/competitive trail riding group and the most amazing 13 year old girl on her completely self-trained 4 year old gelding. I was impressed! We hung back toward the end for much of the ride, since again, B is not too fit, and Nicole's gelding also came with us and while he's not AS unfit as Bronwyn, not as fit as some of the other horses that headed right out and lost us in their dust at the beginning of the ride!


I forgot to mention that there is a part of this trail that is SO gorgeous, so ethereal... you feel kind of like you're intruding on a fairy's forest. Of course it had a carpet of pine needles and fallen autumn leaves. I wish that my pictures did it justice, so I photoshopped a little bit to try and express the FEELING of it, even if the picture doesn't capture it too well: 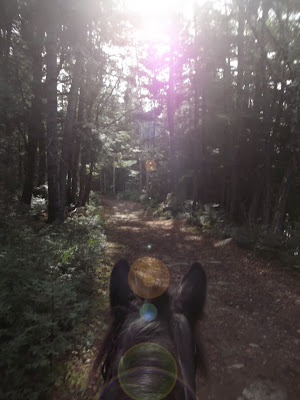 While we had more company and we even took a short cut, and though I wasn't sore when I initially mounted up, I got sore way quicker on this ride than the one the week prior. It was a tough pill to swallow when I realized we still had a couple of hours before we made it back home, haha!

Nonetheless, Bronwyn looked pretty chipper at the end of it! Here we are, coming in at the end of the ride with Nicole's friend Allie and Nicole's gelding, Coby (who has the same sire as my mare Ari and is a full sister to Shay's mare, Jessie, that I have posted before). 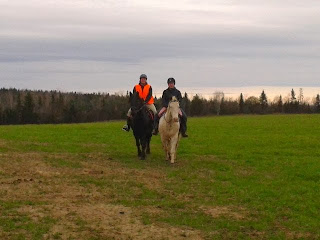 You can read what Nicole wrote about the group ride here.

The following day, we headed out for the Clyde Ride... This is traditionally a much shorter, slower ride, and always a good time with a potluck after. I figured after twice doing the 14 mile ride, it would be a good idea for us to do something less demanding but still active in order to help my muscles get "let down easy". It seemed to have done the trick. Of course it was a great time, and I met a local blog reader (but sadly didn't get any pictures!)... and my real camera batteries died so I only had a couple of pictures from my phone. 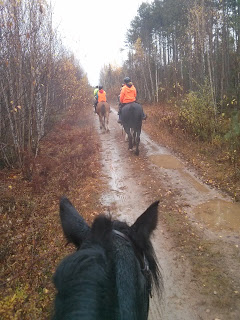 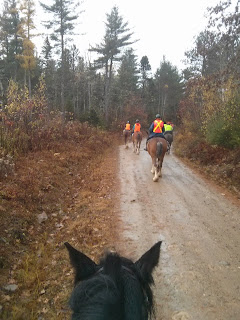 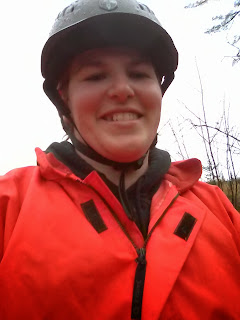 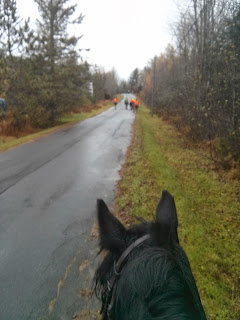 And then, of course, the gratuitous dork picture (complete with face) which caused my father to make a commentary about my work in the field of bringing sexy back in my borrowed raincoat:


If anything, those 8 days told me one thing - trail riding is what we enjoy the most. I could get used to the distance riding if we had two things -- a fleece butt cushion for my saddle and boots for Bronwyn's fronts at least as she was getting a little footsore on the gravel bits but was not lame (do they even make them big enough for her giant feeties?).