Listen up, ladies... - and men, too - because this might be important for you to read as well!

This might not be popular. And I might be crossing the line into a bit of "feminism" here, too.

I try to repost as many relevant things as I can on the Facebook page, but I can't post internet memes about "real women" having specific body parts. You've seen them... they are usually colourful and feature some womanly icon who isn't a size 0 and they say things like "Nobody wants a steak that is all bone so why would a man want a woman without a little meat?" and "REAL women have curves", and a variety of other things that speak about your validity and desirability as a woman based on your physical attributes.

Here is the thing - real women are fat and skinny, tall and short, have hair on their face and smooth, hairless bodies. They come in every shape and size, nationality and personality. Even though we, as fat women, have been told by society (and sometimes even the people in our lives that are supposed to love and care about us) that skinny women are better than us - more desirable to men, more successful and more attractive - indeed, more "womanly" than us, the answer is not to try to juxtapose ourselves as better women than anyone.

I do not want to be more woman than anyone. I just want to be a woman, recognized and appreciated as such, whether I weigh 100lbs or 400lbs. The amount of fat and weight that I carry on my body has absolutely nothing to do with the gender with which I identify. I do not want to marginalize or ostracize other groups of women in order to make myself feel better.

Don't get me wrong... it is understandable to want to do so. I know why it is easy to do this. For your whole life, likely, people have seen fit to comment on the state of your body without your permission like you are not even a human being let alone a powerful, wonderful woman. I've mentioned before that I was once looking at a sales rack in a clothing store when an elderly man approached me to remind me that I couldn't fit into any of those clothes and shouldn't bother looking. Yes, these sorts of things made me angry. They made me want to hurt someone the way that I was hurt.

But let's think about it this way - you know you have that friend on your Facebook page that once in a while posts something derogatory - probably one of those "some ecards" internet memes that make some sort of commentary about a fat person in Walmart, or whatnot. You know they didn't mean it for you because, well, obviously they are your friend... but a part of you feels badly and it stinks because you feel like you don't have a right to say anything because it wasn't directed at you. When you start posting the comments about "what man wants a bone?", you are certainly making someone else feel the same way you feel when you see derogatory comments about fat people - and if you're a half decent person - why would you want to make someone else feel that way?

People, and specifically women, are sometimes fat or skinny despite their best efforts, because of genetics or medical conditions or sometimes because they just want to be. You don't know the passage of their life, you don't know how or why they are where they are or look the way that they do, and assigning "bad" to skinny is no better than them assigning "bad" to fat.

And that is why I don't allow any "better than" talk on my Facebook page. Because we don't have to be better than to be good, wonderful, authentic, marvelous women. We are all enough just exactly the way that we are. 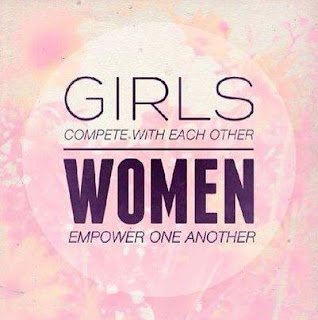