So, I had decided LAST Friday, with the forecast predicting BEAUTIFUL weather all weekend that, with my fist raised, I swore that I WOULD ride my horse, there would be no excuses or exceptions! It seems like a lot of the time that I am able to make it out to the farm, there are lots of excuses (or legit reasons) not to ride - more often than not, it has been weather. My sister, Shay, has been going to a local barn to ride to get her "riding legs" back under her, and so she has a bit of the bug as well. Her mare is a sweet thing that chose her as a weanling. The two of us took off for a trek on Sunday afternoon into the woods. 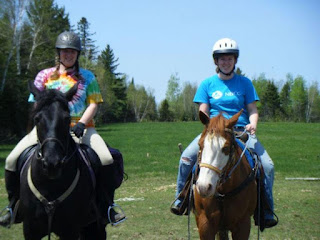 Bronwyn got to wear her new purple saddlebags that I bought at a livestock auction for her a few weeks ago for $25. Figured I couldn't go wrong and they are *almost* like new. The only issue I had with them, once I got them strapped on, is that they are SO DEEP that you almost have to fall off in order to get your hand in to the bottom of them!

We went across the road from our farm into the woods on a property owned by family that has been clearcut (this is not the same clearcut that bothered me so much when it was being done) - we used to ride this trail often when I was younger. I hardly knew I was in the same place! It was so drastically different in landscape from the last time I had been there, that I was completely thrown out of the loop when I saw familiar landmarks (fields, large rocks, etc) and they seemed so out of place. There was also a boggy spot with a big, sucky mudhole that Bronwyn quite enjoyed.

My sister's mare also didn't seem to have any problem with it which was pretty darn awesome because, for some reason, I had thought that most stock horses were allergic to water (I know the ones I rode as a kid sure were!). Overall, I was very proud of the girls - but Bronwyn is SO out of shape... definitely something that we need to work on! There were a lot of low hanging branches which required me to duck (at one point, lay down over her neck while she stepped over a branch), lots of branches across the path, and some tight spots but my girl was a superstar. Previously, when she heard branches scratching the top of my helmet, it would send her through her skin but she had absolutely no problems with it.

As you can see in the middle picture, the trail needs cleaned up quite a bit but as a general rule, it's a very nice, flat, easy ride, as long as your horse doesn't mind a bit of water and a bit of sun as not a lot of the trail has tree cover (Shay actually sang a few verses of "Horse With No Name" ("You know I've been through the desert on a horse with no name..."), which is one of her most-hated songs by far, just because of the irony of the situation - quite hot and much like a desert!) - overall, I think we will be out there again... THIS WEEKEND! :) 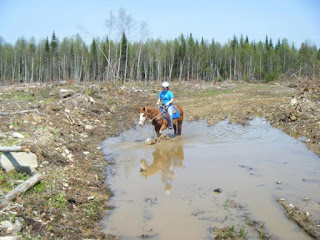 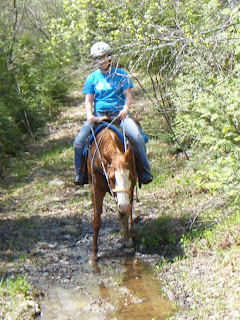 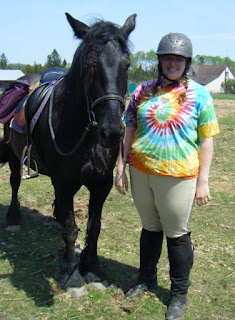