A week ago on Saturday, I was thankful for having a steady mount. Bronwyn and I decided to finally ride up on the clearcut that has happened next to our home (you might remember me blogging about it and how upset it made me). All the snow that had been on the ground had melted out and it was a really mild day - we had gotten a lot of rain shortly before it but it had backed off and I was really looking forward to just riding my horse up into the mountain and being able to unwind from some personal stresses that were going on.

Bronwyn was keen so as we headed out the driveway, we picked up a brisk trot. As we were passing our pond, all of a sudden, there was no horse under me. Thinking she had stumbled, I supported her head the best I could and tried to keep her from doing a nosedive and Bronwyn managed to stay on her feet. She continued to trot off as though nothing had happened. I reined her in and looked behind me to find an enormous gaping hole in our driveway.

She had put a front foot through a spot beside the cedar culvert that someone had built several years ago. Fortunately, there was no metal for her to cut herself on or get caught up in. Due to the heavy rains we had been experiencing, the earth beside the culvert had just washed away and left a sinkhole. She walked off sound and we completed our ride with no problems - she was not sore even the day after. I was so impressed with her steadiness, and the way that she just took things in stride.

It's funny because to many, she is not predictable, she is difficult and sometimes I feel like she can be a handful. On our longer-than-should-be-legal 4 hour ride, she was full of it when we left - my dad actually said later on that he hadn't been sure if I could handle her. She is reliable in her unpredictability, and the strong underlying current, despite some of the fears she still harbours, is that she trusts me and I trust her and in the end, that is why we get along so well!

Later on, I became thankful for other things that were related to saturated ground and rain. 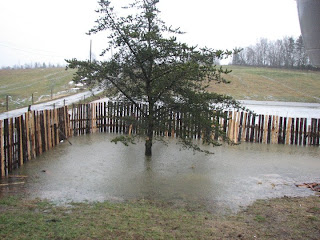 This is a picture of what our front lawn looked like earlier this week - you can see the spot on the driveway where we fell through the sinkhole. The pond in front of our house is supposed to start about three feet behind the fence. Eventually, we unclogged the old rotted culvert and set most of the pond free and our dog yard is no longer flooded through, but the rain did more damage to other areas.

I lucked out. I am thankful.

These images were taken on roads that I travel on at least a weekly basis (some of them more like daily). This was all from a day's worth of torrential rain. 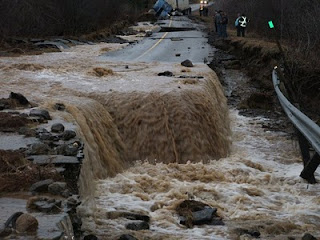 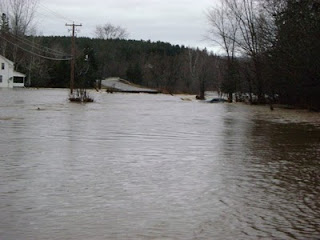 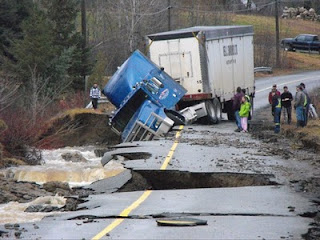 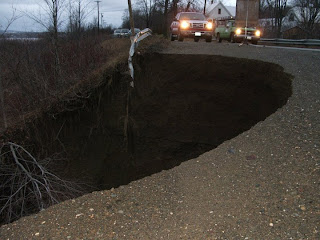 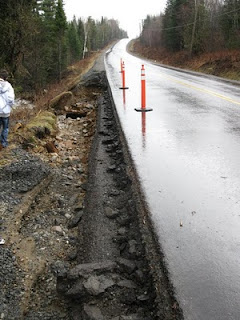 Fortunately, our place sustained no real damage, but places just 20 minutes away.. people were evacuated, horses had to be moved, reports of riding rings and barns down, pastures flooded, homes picked up and MOVED by the water.

The area is rebuilding, but this has always been one of those "it can't happen here" things.
Posted by A at 9:07 AM