Life With The Non-Horsey Significant Other (or... "Can Anybody Find Me Somebody To Love?")

Single horse girls who feel alone on Valentine's Day, let me talk at ya a minute here.

There once was a time that I was convinced that the only person I could spend my life with was someone who was raised exactly the same way that I was - on a farm, with a love for horses, and a methodology that was all ask and give, not demand and take.

You grow up hearing horror stories as a horse girl, right? The non-horsey SO (significant other) that rolls his eyes when you show up with a bit of hay in your hair or smelling of manure, complains because you've spent too long at the barn (or worse yet gets upset when you spend too long at the barn with a sick horse!), does not even bother to look at the horse as anything but a money pit. You know the stories I am talking about. The ones where, even though at the beginning, it seems like your SO is really into "whatever makes you happy" but when it comes straight down to it, there is always an underlying jealousy of the equestrian activities in your life, and a resentment that will bubble up at the worst times (like when you are already butting heads about something else and the horses become a weapon intended only to wound you). I grew up scared. I grew up convinced that I could only date someone who ALREADY KNEW about all of these things because they lived it.

There was a period of time where I was pretty convinced my life would play out like this:

G and I have been together a little over three years now. I'm not going to be completely outrageous and say that I have all the answers or that we have the perfect relationship, but I would not call him a "horse person". He's not really a city boy but he also isn't the same level of "country folk" that I consider myself and my family to be. Up until two years ago, he was almost 30 and had never been on a horse. He doesn't instinctively know which side to lead the horse from, and sometimes I have to explain the reasoning and safety motivations behind the things that I do/feed/buy... sometimes I have to explain those more than once.

But it's all okay - because G, even though he does not share my passion for horses, nor is he interested in owning his own, understands, in the best way that someone who doesn't know horses can, how important they are to me. There was a period of time in our relationship where I was living away from the farm, with him, in the city and the distance was making me antsy. I would feel guilty for not being at the farm when I was in the city, and then when I went to the farm, I would feel guilty for not being with G. I felt like I was being pulled in a million different directions and I just couldn't "normalize" - as a result, I felt terrible the majority of the time. This was just before we made the decision to move Bronwyn into the city.

The most important thing that ever happened was when G verbally acknowledged the difference in me, mentally, once she was closer and I could see her in a neutral place without feeling guilt in either direction. I really think that was the point where it crossed from "oh my girlfriend likes horses" to "my girlfriend has horses in her blood", and he stopped thinking it was so funny when I always told him I had horses instead of paying therapists.

When board increased, as it does, he did not bat an eyelash, even though our finances have been together for some time - at one point, we were paying over half of what we paid in rent for ourselves on board. While I eventually made the more common sense decision on my own to move her home so we could save more money to eventually have a home where she and Rex could be with us, he never initiated it, never complained, never sat down and "had a talk". 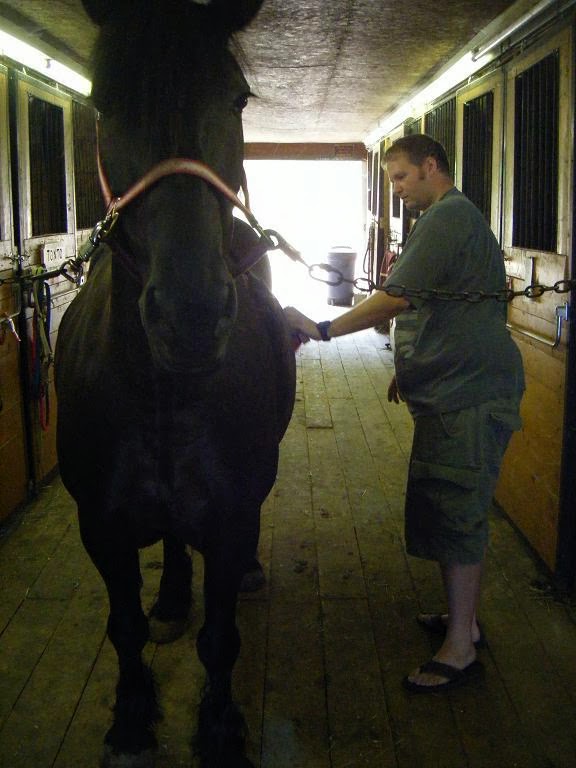 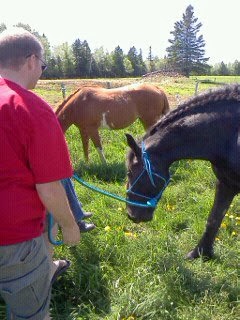 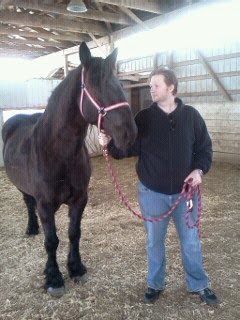 While they had many opportunities to "get to know one another" and Bronwyn soon recognized him as her treat dispenser and official groom/slave, G still does not have a passion for horses. What he does have is an understanding. Part of this is that I made an effort to make it very clear to anyone I invested myself in emotionally that I also had a significant long term investment in horses. They didn't have to share it, they didn't have to learn to love it, they just had to accept it and try to understand it. Though I ask him to come to the farm/barn and visit once in a while, I never demand it and more often than not, he is not sitting at home waiting for me to come home. We both have our individual interests and feel independent and confident enough to be able to go out and enjoy those things - sometimes with other people - and then come back together over the common interests that we have.

So no, I have discovered - I don't need a man who already knows and loves horses. Besides, I would hate to have to butt heads over training methods or beliefs. Sure, there won't be many times that I can sleep in and expect him to go feed the horses and clean stalls and do all of the work that I have committed myself to on the long term - but if I was to go the spinster route, I'd have had to do it myself anyways.

What I do have, at the end of the day, is someone who will give me a hand when I ask for one. He won't know the things to do before I ask him to do them, so our communication skills will continue to develop and grow stronger, because I won't expect him to know those things, either. I will have a partner who will hold my hand and support me when things don't go the way I hope they will - not because he understands the other implications of what that will mean, but he will understand that I am disappointed and it's not just 'a silly horse thing'. He will keep me realistic, but he will indulge my silly side once in a while. He will want to know what the vet said. He will come to the barn and take pictures when I ask him. He might even get on a horse if I beg. He will support me without sharing my passion.

Girls - if you are growing up the way that I did - thinking you will have to find a cowboy if you want to spend your life with someone or spend your life alone - think again, think outside the round pen, so to speak. :) Be clear, be concise, don't be unreasonable or uncompromising, but understand and recognize where you will draw the lines of compromise for yourself. Give it a shot, you might end up with something you didn't think was possible. :) 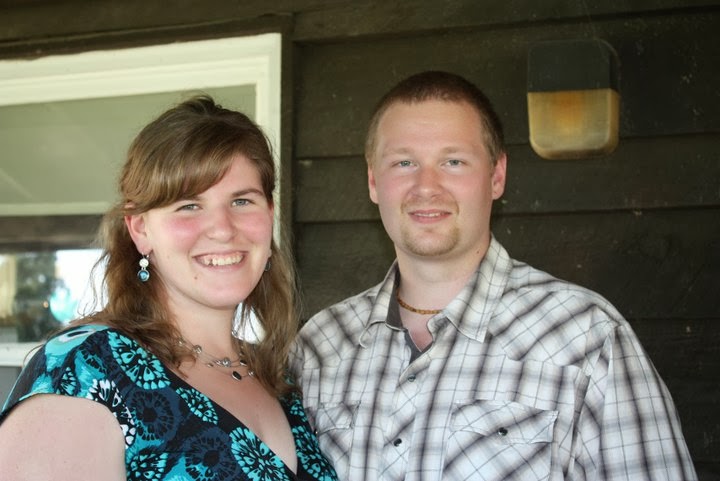